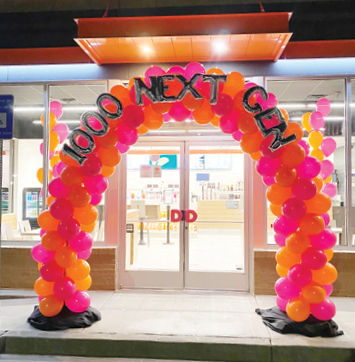 For Andy Awale, who opened his first Dunkin’ in Georgia in 2015 and now has 10 locations, the spotlight was shining down on his new restaurant in Woodstock. On March 24, 2021, the location at 8000 Alabama Road NE (in metro Atlanta) officially became the one thousandth Next Gen restaurant to open in the Dunkin’ system. The event was commemorated in grand style with balloons, a ribbon cutting, a $1,000 grant to a local hospital’s neo-natal intensive care unit and prizes for store customers. The celebration – and the sleekly designed Dunkin’ – has been a crowd pleaser so far. Awale says sales have increased week by week since he opened, topping $31 thousand a week in June. Customers, he says, love the kiosk ordering system, gleaming espresso machine, and digital drive-thru menu board. There are little kids’ fingerprints on the front-facing bakery case and service is fast and efficient. “All this adds up, and customers see it as an improvement,” he says.

The opening comes three years after Dunkin’ first introduced the Next Gen concept in Quincy, Mass., home to the original Dunkin’ Donuts coffee shop that opened 68 years ago. At the time, Dave Hoffmann, the former president of Dunkin’ Brands, referred to the launch of the next-generation concept store as one of the most important moments in Dunkin’ Donuts’ growth as an “on-the-go, beverage-led brand.” It correlated, of course, with the brand’s decision to shorten its name to Dunkin’ to reinforce the beverage-led strategy. The Quincy site was the first of 30 new and remodeled Dunkin’ restaurants that tested variations of the “Next Gen.” After the test period, Dunkin’ unveiled a final version of the Next Gen concept design.

Dunkin’ isn’t alone among QSRs testing and launching new interior and exterior designs. McDonald’s, Panera Bread, KFC and Starbucks are just some examples of chains responding to changing demographics, technology and competition. In fact, as more chains seek the “fast fancy” moniker, brands are regularly rethinking the branding and design of their restaurants. Consultants suggest that stores undergo a refresh every three to five years—updating interior features such as paint and light fixtures, floor, and menu boards.

For Awale, the transition of his suburban Atlanta franchise to Next Gen cost $800 thousand, but “was absolutely worth it and, within a year, we will recoup that money big time,” he says. Redesigns typically provide at least a temporary lift in sales. According to data from DDIFO Restaurant Analyst John Gordon, founder of Pacific Management Consulting Group, sales at quick-service restaurants typically increase from 3% to 6% after major interior and exterior remodels (like a Next Gen transformation), and the lift will last at least two years.

Maintaining a brand’s image has always been a critical part of the business. Consider the iconic buildings associated with brands like Pizza Hut, Arby’s and Stuckey’s, not to mention the golden arches at McDonald’s. Integrated, physical branding can shape consumer expectation, and today’s consumer is greatly concerned with image, branding and convenience, according to Jayson Tipp, chief growth officer for the Perfect Company, which designs enterprise technology solutions for restaurants to increase profitability.

“For restaurants to succeed, they have to have a modern, enticing brand, and that includes the design aesthetic of the restaurant,” Tipp says. “The speed with which a brand update, or a brand failure, can be disseminated on the internet only amplifies this phenomenon.”

As for the Dunkin’ redesign, the chain did a great job staying on brand and providing a modern version of an iconic concept all while appealing to what is important to the consumer, says Mark Moeller, national restaurant consultant and owner of The Recipe of Success. “Perhaps what resonates with me most is their commitment to efficiency in design, architecture and equipment,” Moeller says.

Bryce Bares, operator of 15 Dunkin’ shops in Nebraska, says when he opened his first store eight years ago in the Cornhusker State, consumers perceived Dunkin’ as a donut shop. “They remembered the old tag line, “Time to make the donuts.” Sales were 60% donuts and 20% beverages, but Bares has seen those numbers flip, thanks in large part to the Next Gen concept. His Next Gen store in Grand Island, which opened last spring, has registered beverage sales well above 45% in the market. Bares says that marked the first time one of his units reached that level.

“I think that the way the design is focused on making beverages prominent from a customer perspective helped us to do that,” Bares says, adding the Next Gen look is more inviting than the old image. Accordingly, the Grand Island shop also logged a high percentage of mobile orders during its premiere, Bares says. 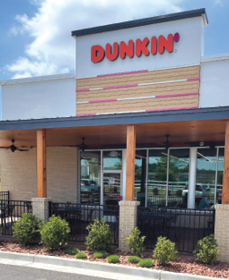 Customers notice the front-facing donut case, the taps used to pour beverages and, of course, the big espresso machines. Dunkin’s decision to place espresso at the front and center of the customer’s view proves the pressed shots of strong coffee demonstrates Dunkin’s view that espresso is a core part of the business. Brand leaders have long said espresso is the gateway coffee choice for millennials and Gen Zers graduating from Coolattas to lattes. Dunkin’s $60 million investment to improve its coffee as part of the 2019 rebranding effort included new espresso equipment, recipes and cups, along with employee training and certification. Bares says he has added a second machine to all his stores to support his growing espresso business. Nationally, Dunkin’ reported a 40% sales increase after launching the new espresso initiative.

Meanwhile, in Quincy, where the Next Gen store is just a mile and a half away from the original Dunkin’ Donuts shop, franchisee Victor Carvalho says he’s happy to pay tribute to the past with the flagship store, while keeping an eye on the future with his Next Gen shop. In fact, he believes many aspects of the new design remain true to the Dunkin’ heritage, like the donut case, which was originally up at the counter before it was shifted back.

“They kept the warm colors and feel of the brand, and of course, the coffee,” says Carvalho. “The delivery service is different and the product line was expanded to include what people are looking for today, but the standards never change.”

Carvalho says guests in Dunkin’s birthplace have embraced the look and feel of the Next Gen store, commenting on the tap system, the high, open ceiling and the donut case. His crew also finds the new design easier to deploy, with a team member manning each station – hot coffee, cold coffee and the register – during busy times so they don’t cross in front of one another.

For Bares, who has four Next Gen stores, the upgrade has brought one unintended benefit—less staff turnover. “They are so proud to be there, versus a store that is dim and old fashioned. They especially like the layout; there’s not a lot of steps or walking,” Bares says, adding the Next Gen’s double drive-thru design was a game-changer during the pandemic, as it made the drive-thru faster and more efficient. Bares says sales were brisk because his teams were able to serve 50% more cars during peak hours than they could using the old, single-lane set up.

Bares is optimistic about his newest Dunkin’ in Topeka, Neb., a drive-thru-only prototype with two separate windows—one for pay, the other for pick up. The design is geared to mobile ordering where customers can skip the first window and head directly to the second. “This is my first drive-thru only unit. I’m pretty excited about it, especially coming out of COVID in our market. Guests have gotten used to that way of ordering and pick-up.”

Dunkin’s Next Gen design has not only changed the aesthetic of this still-growing brand, it also accommodates the purchase patterns young customers are embracing. Awale underscored the point at the ribbon cutting for the one thousandth store, saying, “We are proud to offer the community an enhanced guest experience, including an approachable atmosphere and exciting innovations.”

Carvalho, whose father Jose purchased the original Dunkin’ Donuts shop in 1979, says if his dad walked into a Next Gen store today, he would give it a thumbs-up. “It’s a different way of delivering our products than when he was in the business. I think he would be pleasantly surprised.”