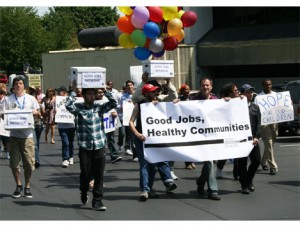 Out on the west coast, voters appear to be passing the so-called “Good Jobs Initiative“, which will mandate a local minimum wage of $15/hour for workers in the tiny city of SeaTac.  SeaTac is a 12,000 voter community, the boundaries of which completely envelop Seattle-Tacoma International Airport.  Consequently, it hosts a large population of minimum wage hotel and restaurant workers.  The current results on the initiative show a 53 – 47% vote in favor of the increase.  SeaTac allows mail-in voting, so ballots that are postmarked by election day are still being counted as they arrive.  If current voting holds and the initiative is passed, watch for similar initiatives to be undertaken elsewhere.