In just one day, the Dunkin’ Donuts in Palos Heights, Illinois, raised $3,800 to support the Illinois Special Olympics Games held this month in Normal, Illinois. Its sister store in Summit, Ill., raised a similar amount, as part of their annual “Cops on the Roof” event, a day when police officers – and celebrities such…

With Dunkin’ Brands setting its sights on improving the in-store guest experience, franchise owners are on the hunt for the best products and services to achieve this goal. Enter DDIFO Sponsor Hi-Tech Sound. You may be familiar with Hi-Tech’s drive-thru and surveillance system products and services, but did you know they also offer guest Wi-Fi… 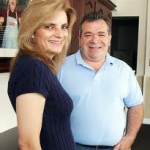 Deo Braga, was honored as Gloucester’s Small Business Man of the Year. Deo left Portugal for the United States in 1981 and embarked upon the American Dream. Starting in the kitchen of a Dunkin’ Donuts in East Boston, the then-20-year-old immigrant quickly baked his way up to position of manager of the Dunkin’ Donuts in Essex, a move which introduced him to Cape Ann, and eventually to Gloucester, where, together with his wife Paula, he would build an entrepreneurial empire estimated today at approximately $20 million and growing.