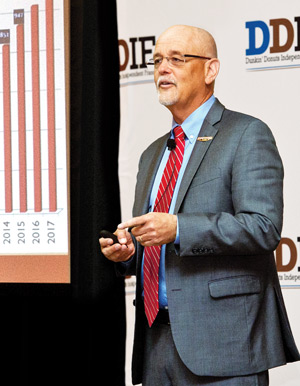 Sure, the franchise world is tough, but measuring success isn’t all that complicated, according to Don Fox, chief executive of Firehouse Subs.

“Growth is not an option,” Fox told Dunkin’s franchise owners gathered at the DDIFO National Conference, held this year at Foxwoods Resort Casino on Oct. 30-31. “In business as in most things in life, you are growing or you are dying.”

It’s a lesson about success that Fox has clearly embraced with Firehouse Subs, known for its “hearty and flavorful fare” and support of public safety workers, having rolled out 1,050 shops and growing fast across the country.

The keynote address by Fox, who rose to the top ranks at Burger King before propelling Firehouse Subs into one of the fastest growing franchised brands in the country, was one of the highlights of the two-day National Conference. Other highlights included a discussion by Wall Street experts on the opportunities and challenges facing Dunkin’ Brands (DBI), the latest information regarding a new form franchise agreement offered by DDIFO’s legal team, and an insightful government relations panel featuring the Republican leader in the Connecticut House of Representatives – who is also the party’s likely nominee to be Governor – as well as DBI’s former VP of Government Affairs (see What’s Brewing).

For his part, Fox told Dunkin’ franchise owners that inculcating your brand’s values should start at the beginning, before a new employee walks onto the job. He offered the example of a new employee who arrives sharply dressed for the first day of work, only to walk past a pair of straw wrappers on the floor.

“If I am a customer and I see that happen, what does that tell me about your location?” Fox asked. “It tells me that’s acceptable. They just walked in, passed the trash on the floor and said it a perfectly OK.”

“Culture gets put on display in many, many ways,” he added. “If you are waiting for employees to grasp your culture after they go to work for you, it’s too late.”

Fox says he can walk into any of his chain’s restaurants – or for that matter any business – and know “within ten seconds if the culture is good or not.”

Fox looks at body language, tone of voice and a sense that employees behind the counter love their work and treat their customers right.

“Have fun,” Fox urged. “At the end of the day it’s a tough business. I’ve been at it for 44 years and if you get up every day and you are not having fun, you are probably in the wrong business.”

Fox also spoke of other values he believes are crucial to successful franchising – great leadership, giving back to the community and frugality.

Leadership, Fox says, starts with leading by example and not asking your employees to do anything you wouldn’t consider doing yourself.

“I have not told you how many toilets I have cleaned over the years,” Fox said. “People are watching your every move – you have to always be mindful of that,” Fox said.

Don’t micromanage either, he warned. Managers and employees need the latitude to come up with their own solutions.

Accountability is also crucial for ensuring that some employees aren’t coasting on the coattails of their more hard-working colleagues. And so is encouraging optimism, which Fox contends starts at the top.

“If there is not optimistic leadership at the top, that gets snuffed out,” he said. “It just dies.”

Frugality is crucial as well, Fox noted, telling the story of a new franchise owner who spent his profits on a $60,000 Hummer and had no reserve to deal with the inevitable down times.

But while living within your means is important, giving back is vital as well, Fox said.

Supporting the community is at the core of the Firehouse brand. A portion of every sale in 2017 goes to the Firehouse Subs Public Safety Foundation, which over several years has raised over $29.5 million for equipment and training for first responders around the country.

But there is also a bottom line benefit to doing good as well, since the restaurants with the best records of raising money also have the best sales, a link that has been backed up by the stats over the years, Fox said. 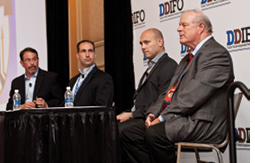 While the sub business is growing, so is the demand for coffee, a fact that should help drive sales and profits at Dunkin’ Donuts for years to come, a panel of Wall Street experts told DDIFO members.

Total sales to consumers at Dunkin’ franchises are up 80 percent since 2007, while coffee now represents 8 percent of all McDonald’s sales, said Michael Kelter, an analyst with First Manhattan Co.

The panel discussed the competitive landscape in the coffee business. John Gordon, DDIFO’s restaurant analyst and the principal of Pacific Management Consulting Group, said unequivocably that convenience stores pose a real threat on a cost of coffee basis.

“Cumberland Farms has put a lot of money into drinks and food,” Gordon noted. “I do believe that McDonald’s is much more of a direct competitor for this brand,” he said.

Still, while the business press has focused on competition for coffee addicts, especially the supposed Dunkin’ versus Starbucks duel, there is enough business to keep everyone’s sales growing, Kelter contends.

“Coffee out of home is an expanding business,” Kelter said. “The profit pie is expanding and everyone seems to be participating and that could go on for a long time.”

The panel of Wall Street experts also addressed ongoing speculation that Dunkin’ Brands could be a takeover target. The Street recently reported that JAB Holding, a privately held firm that has gobbled up Panera Bread and Keurig, may also have set its sights on publicly-traded Dunkin’.

“JAB has taken out Peet’s Coffee, Krispy Kreme, Panera, they have been very aggressive, said Michael Halen, restaurant analyst at Bloomberg Intelligence. “To me it makes a lot of sense – because it is franchises they can get a deal for a smaller cap.”

The narrative changed after the conference had ended when JAB announced it was buying Au Bon Pan, a small coffee and bakery chain. Regardless of the latest acquisition talk, the longer-term trend is clear, said First Manhattan’s Kelter.

“The likelihood of Dunkin’ being a standalone public company in five years is 50 percent,” Kelter said. “A larger company can do a better job with IT and marketing.”

Meanwhile, DDIFO’s legal panel provided members with an update on the latest developments in negotiations with Dunkin’ Brands over the franchise agreement and other issues. 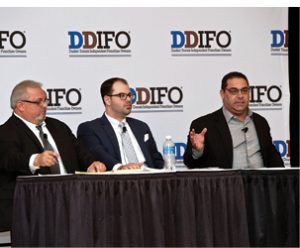 Attorneys Carl Lisa, Jr. and Christopher Menihan of Lisa & Sousa noted there were upcoming changes to the CML Agreement that governs the central kitchens supplying donuts and baked goods to most Dunkin’ franchises, but were not at liberty to discuss them.

“There are some extensive and very good changes that are very well thought out,” Lisa said.

However, Lisa and Menihan were able to discuss negotiations over the Franchise Agreement and successful efforts by DDIFO’s legal team to head off potential changes by Dunkin’ Brands.

DBI’s legal team had added provisions that would have given Dunkin’ Brands the right to relocate a franchise at the end of its term and the right of first refusal should it come up for sale.

Both would have generated more money for the franchisor at the expense of Dunkin’ franchise owners, the attorneys argued.

After a couple of false starts – including one in 2016 when Dunkin’ Brands began circulating a new agreement that had not been viewed by the Brand Advisory Council – DBI was convinced to revert to earlier language in the 2015 agreement, which did not include the new wording.

“When it comes to changes in the franchise agreement, you really have to read between the lines,” Lisa said. “It tells a story and the story is the direction the brand wants to take everyone.”

That was a message that resonated with the crowd of franchisees that came from across the brand’s footprint to be informed and entertained, and consider how they measure success in an environment that was free of brand input and away from their day-to-day grind.