Dunkin’ Donuts’ new TV ad featuring the world’s fastest flying woman, Ellen Brennan, using a mobile ordering app then soaring from an 8,300 foot mountain peak to pick up her sandwich, is exhilarating to say the least. Dunkin’ wanted to make the point that its new On-The-Go mobile ordering feature is fast—and it did. And, while the media coverage for On-The-Go has generally been positive, the brand has been a magnet lately for tough questions about slow revenue growth and diminishing store traffic.

In his appearance on CBNC, Dunkin’ Brands CEO Nigel Travis admitted, “It wasn’t a spectacular quarter.”

The ever-colorful New York Post put it another way, “McDonald’s eats Dunkin’ Donuts breakfast.” It’s not the kind of headline any brand wants to see in the nation’s largest market, where the influence of McDonald’s All-Day Breakfast is a factor. 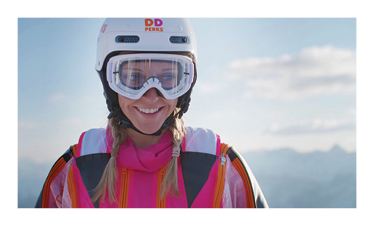 Travis blamed franchisees for raising prices in response to higher labor costs brought about by campaigns like “The Fight for $15.” Some franchises are quick to point out that the brand recommended higher MSRPs when it eliminated combo deals.

From the consumer’s perspective, stories about weaker-than-expected sales growth have been wedged alongside news of big, new brand initiatives like the rollout of Dunkin’s wicked fast On-The-Go app and its newest foray into iced coffee.

At a time when U.S. consumption of coffee is expected to increase by 5 percent per year or more, Dunkin’ has introduced a new, premium iced coffee product aimed at younger consumers, “Cold Brew is yet another example of the beverages we are introducing that further establishes Dunkin’ as a coffee authority and drives sales,” Travis said on his July earnings call. In general, media coverage of Dunkin’ Cold Brew has been positive. Boston.com wrote, “The cold brew release represents a continuation of the company’s efforts to appeal to coffee connoisseurs.” 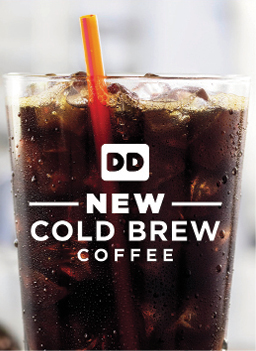 Cold Brew comes with a premium price, which could help franchisees increase profits in the long run, but could first contribute to the perception that Dunkin’ Donuts is not the blue-collar, cost-effective beverage and snack choice it traditionally has been.

During the July earnings call with analysts and reporters, one analyst jokingly asked Travis if Dunkin’s new high-end coffee offerings are leading the brand to a new motto, “Starbucks quality at Dunkin’ prices.”

Industry reporter Shelly Banjo, writing in The Seattle Times, suggested, “Imitation is the sincerest form of flattery and also one of the easiest ways to lose your identity. Traditionally lowbrow Dunkin’ Donuts has been pushing into tonier offerings, such as espresso, cold brew coffee and Rainforest Alliance-certified coffee beans—so much so that it’s beginning to look a lot like Starbucks.”

Dunkin’s sluggish sales may be a sign of things to come. Restaurant watchers say weakening consumer confidence, fueled by political and global uncertainty, is keeping traffic down and sales flat. Analyst Paul Westra at Stifel Financial was the first to suggest the restaurant industry is in the midst of a downturn, based on sluggish second quarter earnings reports from 15 of 16 major foodservice chains.

“In the year preceding the last three U.S. recessions, on average, restaurant stocks have declined 23 percent,” Westra wrote in a research note in August predicting an average decline of 20 percent for restaurant stocks in the second half of 2016.

Experts note the pizza sector is not showing the same weakness this year, which also indicates a possible restaurant recession. “Pizza chains typically do well when consumers cut spending due to their value proposition,” analyst Michael Halen says.

Travis knows well how pizza brands can succeed in tough times, having earned industry accolades for his leadership at Papa John’s during a three-year tenure as CEO from 2005-2008, which coincided with the Great Recession. As Dunkin’s chief, Travis has committed to opening another 8,000 new Dunkin’ Donuts restaurants across the country—filling in what many have called the “white space” between Dunkin’s core markets in New England, Chicago and Florida. It remains to be seen whether those plans will be shelved if the restaurant industry goes through several quarters of negative growth.

What may be more troublesome than the economic blip of the moment is the perception that Dunkin’ is stuck in the middle. It is not a premium brand like Starbucks and, it is not a bargain brand like McDonald’s or the local convenience store/gas station. Wall Street has soured on many well-known middle-of-the-road retailers like Macy’s, Sears and JC Penney, preferring bargain brands like Walmart and Target.

According to DDIFO Restaurant Analyst John Gordon, principal of Pacific Management Group, franchisees have to weigh the need to increase prices to cover rising labor costs and ensure they have sufficient cash flow to cover the cost of remodeling their restaurants to comply with brand standards.

Raising prices is a tricky proposition during this time of political and economic uncertainty. Consumers are understandably price-sensitive—especially Dunkin’s core customers. It’s one reason why Gordon says the brand needs to work hard at upgrading its customer mix.

“Dunkin’ has to increase the number of customers that are not as price-sensitive, because these customers can absorb a price increase better than the brand’s traditional blue-collar customer,” Gordon says. “They can do that by ensuring the quality of their beverages and the customer experience.”

One way Dunkin’ is doing that is with innovations like On-The-Go ordering. Customers who pay ahead with their mobile phones get their Dunkin’ done fast, and they may not even notice the extra cents they’re paying for a coffee and flatbread sandwich.