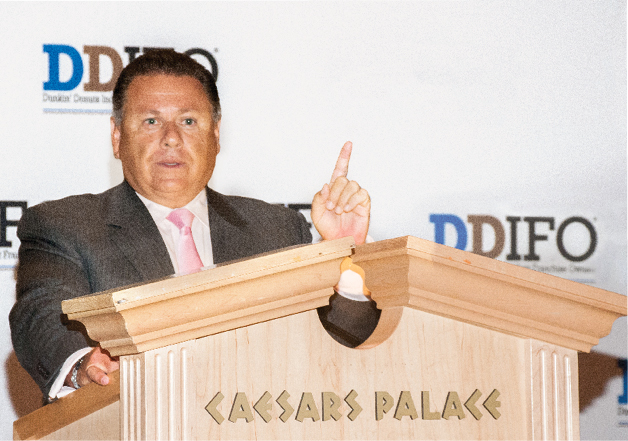 Franchise owners at DDIFO’s national convention in Las Vegas had surely heard all the talk about the end of franchising as we know it.

The National Labor Relations Board’s controversial joint-employer decision has triggered a backlash in the franchising world, with the labor board ruling that a big recycling company is responsible for the employees of a staffing firm it hired.

The decision comes even as the NLRB weighs this fall whether to declare McDonald’s a joint employer with its franchise owners.

The two cases have fueled doomsday-like fears that franchise relationships across the quick-service industry could be upended, with the line between franchisor and franchisee suddenly erased.

But probably few at the DDIFO’s annual gathering could have predicted renowned franchisee lawyer Robert Zarco’s radically different and eye-opening take on the landmark issue. Zarco argued NLRB’s joint-employer ruling is far from a catastrophe for franchise owners.

Instead, it may be the “greatest benefit you guys ever had,” he said.

In fact, it could provide key leverage for franchise owners to push for a better deal from their corporate parents.

Zarco’s take is a bit jaw dropping given the conventional thinking about the NLRB ruling in the franchise world and beyond.

In its late August decision, the labor board ruled that Browning-Ferris Industries is a joint employer with a staffing company that provides the employees that operated one of its California recycling centers.

However, franchisors and their industry groups have been effective in obscuring the real issues and instead portraying the ruling as an effort by a big federal bureaucracy to undermine small businesses, he argued.

The media has joined in, reporting how the NLRB decision is a looming threat poised to wreck the very foundations of franchising across a myriad of brands, including Dunkin’ Donuts.

Franchisors have even hinted that the labor board’s decision, if not reversed, could force them to take drastic action, such as terminating franchise agreements and turning what have been independent businesses into corporate stores.

But such threats are simply a smokescreen, Zarco contends, to disguise the real issue that has the big franchisors pushing the panic button, and that’s liability.

Up until the NLRB ruling, most franchisors had the best of both worlds. They were able to effectively control everything from hiring to how a tomato is sliced at their franchised locations, yet – at the same time – could claim they were not at fault when injuries or things went wrong at their restaurants, Zarco explained.

However, now that quick service chains face the real possibility of being labeled a joint employer, they could find themselves even more of a target for class action suits resulting from injuries or mistreatment of employees hired by the franchisee.

Zarco says that could prove expensive, since lawyers would seek to go after the deep-pocketed franchisor in a case if they could.

Hence the stiff opposition, including efforts to recruit franchise owners to provide a sympathetic face for the cause amid a fierce lobbying push by the major franchisors.

What the ruling really says

The fact that few people have actually bothered to read the 55-page NLRB ruling may be one reason opponents have been so successful in obscuring the real issues behind their campaign to torpedo the ruling, Zarco argued.

Shortly after taking the podium in the Augustus Ballroom at Caesars Palace, Zarco asked for a show of hands from DDIFO members who had read the labor board’s decision.

Just one hand shot up.

In his explanation, Zarco said that far from overturning the time-honored rules of franchising, the NLRB’s decision simply updates rules crafted decades ago when most people worked directly for a company. But, because the economy has undergone a major transformation, with companies relying much more today than ever before on the work of independent contractors, the labor board is recognizing this shift and trying to ensure that companies aren’t shirking their responsibilities to what are effectively employees through subcontracting relationships, he said.

Many franchisors, in turn, have increasingly blurred this line, mandating in increasing detail what franchise owners should be doing on a day-to-day basis and calling into question their independent status.

The NLRB lays out criteria for deciding whether a franchisor is in effect acting as a direct employer, rather than a more hands-off corporate parent.

That, in turn, means exercising control over key areas that the independent franchise owner should control.

He conceded, franchisors are allowed to control franchisees to protect the value of their brand and the quality of their products, but not to control things like hiring and firing, business hours and other day-to-day operations.

The McDonald’s case has also been cited as potentially threatening the foundations of franchising.

But the pending NLRB ruling, which could wind up labeling McDonald’s a joint employer, won’t necessarily impact franchise owners in other brands.

That’s because the case revolves around allegations that McDonald’s snooped on and harassed employees at its franchises who were involved in protests over the chain’s labor practices.

Franchise owners who follow the law won’t have anything to worry about, Zarco said.

“Maybe if you start threatening your employees if they start complaining
about their wages and working conditions, you may find yourself in the same situation,” Zarco said. “But if you don’t violate your employees’ rights, you are going to be fine.”

What to expect next

The prospects of expanded liability and costly lawsuits are what franchisors are most concerned about now, Zarco explained.

In fact, many current franchise agreements leave franchisors extremely vulnerable on this front, detailing many requirements and mandates that could be interpreted by the NLRB as evidence of a joint-employer situation.

Zarco believes franchise owners should expect to receive calls from their brands in the months ahead, seeking to rewrite their franchise agreements.

Franchisors want to protect themselves from liability by distancing themselves in their new contracts and potentially inserting legal language which puts all liability on the franchise owner.

Yet for franchise owners, the demands of their corporate parents and the trade groups that represent them, both for political help and for cooperation rewriting franchise agreements, presents a golden opportunity, Zarco argued.

Franchisees should seize the moment and use their newfound leverage to get better terms.

“You can use this time, this law, as a bargaining chip to change your contract,” he urged.

As franchise owners consider what, if any steps to take next, Zarco said there is one thing that definitely won’t happen. Despite hints and threats, franchisors
will not start terminating franchise
agreements and taking them over as corporate stores.

“We are now going to start taking over your day to day operations,” Zarco said, reciting the propaganda coming out of franchisor circles. “Bull! Not happening.”

First, such a move would cost franchisors a fortune, requiring the hiring of countless new managers, among other things. Second, Wall Street would go nuts, punishing their stocks, given that franchising has long been at the core of success of these corporations, he said.

“Their stock price will crash, their investors will head for the hills,” Zarco said.

Last but not least, by taking over restaurants directly, the quick service chains, instead of insulating themselves from liability, will instead put themselves directly on the firing line.

“Think outside the box,” Zarco said. “This is your livelihood. Don’t get sucked in by baseless propaganda. Don’t follow like sheep.”