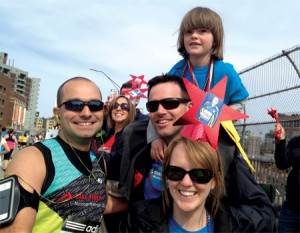 Chris Prazeres with friends and family at mile 25 of the Boston Marathon. Because of the bombings Chris and thousands of other runners never made it to the finish line 1.2 miles away.

Of all the scenarios that Christopher Prazeres imagined as he toed the starting line for the legendary marathon course, he never dreamed that the world’s oldest annual 26.2-mile race would be tragically interrupted by terrorism. It was a sunny April 15 morning, and Prazeres, a second-generation owner of a network which includes seven stores in Rhode Island’s East Bay, was ready to run. He wore bib number 23069 out of over 27,000 registered runners, and after five months of intense training, 20 pounds shed, and carbo-loading, Prazeres was raring to run. “I’m not sure if it was nerves or anxiety, but I was very excited. The Boston Marathon was the most important thing I’ve ever done in my life,” said Prazeres, 37, chairman of the Dunkin’ Donuts Independent Franchise Owners (DDIFO) Roundtable. He was running to raise money for Dana-Farber Cancer Institute in Boston, a world leader in adult and pediatric cancer treatment and research. Dunkin’ Donuts has long been a proud sponsor of the charity, said Prazeres, who gathered donations from friends and family to run in the memory of his grandfather, Jose Martins, and uncle, Antonio Prazeres, who bravely fought cancer before succumbing to the disease. “Also foremost in my heart and mind were memories of John Henderson, a dear family friend to me and the Dunkin’ Donuts community, who died from a rare gastro-intestinal cancer five years ago.” said Prazeres referring to the beloved former chairman of the Dunkin’ Donuts Northeast DCP and long-time owner of several Rhode Island shops.

After passing through the tough, grinding stretch of Heartbreak Hill in Newton at miles16 and 17, Prazeres was beginning to tire. His blistered feet aching from the miles of pounding, his body overheated and nearing exhaustion. But his wife, Lori, and two kids, Andrew, 5, and Brady, 7, and many others awaited him at mile 25 along the overpass atop the Massachusetts Turnpike, near Fenway Park. Also in this support crew was his brother Cliff and father Joe Prazeres, fellow franchise partners, and Rob Batista, another Rhode Island franchisee. “And perhaps most importantly my five-year-old patient-partner, Jackson Souza was watching for me, an awesome little guy who has been diagnosed with a rare form of lymphoma. His journey gave me inspiration and pushed me to cross the finish line.”

But that was a finish line that Prazeres would never see. After passing his family and friends, and the “1 mile to go” painted on the pavement, and before making the turn onto Boylston Street, the stream of runners suddenly started slowing down and then drew to a halt. “What’s going on?” wondered Prazeres, reluctant to slack his pace so close to the finish line. “Runners were turning around, waving, some upset saying, ‘I’m not going to stop – I’m close to my personal best.’” The time was 2:50 pm, and Prazeres was 4 hours and 50 minutes into the race when he heard someone say, “There are explosions at the finish line.”

The rest is a blur – hobbling back to his family at mile 25, jumping into the car, hurrying back to his home in Seekonk to rest his tired legs and turn on the news. “I couldn’t believe what I was seeing,” said Prazeres, “such a terrible and terrifying tragedy. I ached for those who lost their lives and limbs.”

Will he run again? “I don’t have the answer to that question just yet,” said Prazeres who said that meeting his family and friends at mile 25 was his “finish line.” But one thing he is sure of: “Next year’s Boston Marathon will be bigger and better than ever.”