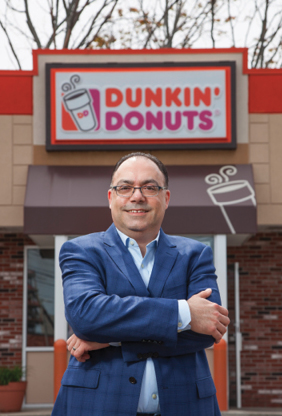 Of course, the Stars and Stripes play a featured role in the summer landscape of cities and suburbs across the country, especially this month. But for Omid, the American flag is a daily reminder of the freedoms he will never take for granted: freedom to own his own business, freedom to practice his Jewish faith and the privilege to do both in peace.

Omid’s story began far from his leafy neighborhood outside of Boston. He was raised in war-torn Iran. It was the 1980’s, and the Iranian Revolution had just ended, but peace was elusive, and anti-Semitism was strong. Soon after the revolution, the fighting would begin anew with the Iraqi invasion. “Being Jewish, things changed for my parents. It changed our life.”

Persian Jews feared religious persecution and faced economic discrimination. Omid’s parents were passed over for promotions, and replaced at work. All around them, the fighting raged on. “At that time, Iraq had started bombing cities. I would leave the house for school and always look back thinking ‘Ugh, what now,’” Omid recalls. “I remember seeing airplanes above my head dropping bombs down the street from us. Every window in our house would shatter and I couldn’t hear for weeks.”

Omid was just 14 years-old. He recalls watching his friends and classmates go to war, and sometimes not come back. “Between the war and what was happening to Jewish people, there wasn’t much of a future there,” says Omid. “And my parents didn’t want me to go to war for no reason. That was when everything started.”

Omid’s parents made the agonizing decision to smuggle him out of Iran and get him to America. They knew it would mean a better life for him. but they couldn’t accompany him. Not yet. Their priority was to get him to safety.

His parents worked with the Hebrew Immigrant Aid Society (HIAS) on the escape route. They got Omid to a border city, where he climbed into a truck with other Jewish teenagers under the darkness of night, and headed for the mountains. Omid waved goodbye to his father, and wondered if he would ever see him again. “I was only thinking about what was going to happen in the future,” says Omid. “Because if you thought about what was happening at that time, you would say, ‘Holy cow, what am I doing?!’”

The journey was as harrowing as it was desperate. Omid could see the spark of gunfights in the distance as they drove through the mountains, Sometimes the drivers would pull off the road and flee, explaining, “If you get arrested, we’ll get you out, but we can’t get arrested.” The group eventually crossed the border into Pakistan and applied for United Nations refugee status, which would allow them to leave. 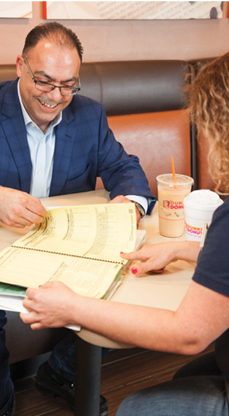 But not before they were robbed of every cent they had by so-called ‘police.’ With so many Jews emigrating, Omid speculates they were easy targets. “It was like they knew we were just Jewish kids, so they pulled us over and said, ‘Give us all the money you have, or we’ll send you back.’” Omid and his group reluctantly handed over their money, and were allowed to proceed. They stayed in Karachi for four months while their paperwork was processed, and then flew to Austria, where the HIAS Center was located.

Omid and other refugees would spend more than a year in Austria, waiting for their documentation to be processed before they could continue on to America. They were at the mercy of an already bureaucratic system strained by the sheer volume of people trying to get to America. In addition to the thousands of Iranian Jews leaving their homeland, there were also Russian Jews escaping the grip of Communism.

Nearly two years after he said goodbye to his parents in Iran, Omid finally arrived in the United States and settled with extended family in Malden, Massachusetts, a city about five miles north of Boston. He enrolled in high school and got his first job as a cleaner at a nearby Dunkin’, spending his afternoons sweeping the parking lot and cleaning the bathrooms. “I knew I had to work, but I also knew I couldn’t do this for the rest of my life.”

Omid was grateful for the opportunity, but set his sights on what would come next. “The D’Alelio family, the franchisees I worked for, were really good. They became like my second family. They taught me how to bake products and make donuts. They always encouraged me.”

Omid’s Dunkin’ family did more than that. They embraced him, hosted him for family dinners and holidays and helped him learn English. But, even with their support, high school was a challenge. “In one way, it was really hard because I had to work at the same time. And the language was a barrier.” Omid explains. “But at the same time, some of the classes I was taking here, I had already taken at home.”

Just as he knew he wouldn’t be a cleaner for the rest of his life, Omid knew a classroom wasn’t where he belonged. He got his school records from Iran, passed several proficiency tests and graduated early, at just 17 years-old.

Omid turned all his time and energy to Dunkin’. He worked 10 hours a day, six days a week. He would stay after his shift to learn more about operations. He was promoted to assistant manager and attended Dunkin’ Donuts University.

“The franchisee I was working for, Helen D’Alelio and her family always encouraged me to do more,” recalls Omid gratefully. “They would have me go to meetings with managers and owners,” says Omid. “At those times, I started to think this could be something for me. But I wasn’t sure it could really happen. But little by little, things started to fall into place.”

Everything finally settled into place. Omid became a manager, then a multi-unit manager. By 1996, a decade after arriving in America, Omid partnered with another franchisee, Vinny Leo, and became an owner. Five years later, he became an independent owner. During that time, he also realized a dream he had held in his heart since waving goodbye to his father as he fled Iran – he brought his parents to this country. His family was united again. Still, that feeling of camaraderie with his Dunkin’ work family remained.

“The franchisees, it was really like a family. I knew a lot of them, and I got to know more,” says Omid. “It wasn’t just about the money part of it for me. I liked the Dunkin’ philosophy. I liked how they started from basically nothing to become a major franchisor. I liked the support.”

25 years later, some things have changed, but many things have remained the same. Omid is now a proud husband and father, but he still operates his stores with the same company philosophy he worked under as a young manager. “I ran that store 24/7, like it was my own, because that’s how the owner made me feel. And that’s how I run my stores now.” Omid continues, “I’ve done everything my employees are doing over the years, so I know how they feel, and I try to be there for them.”

Omid’s allegiance to the brand has never wavered. Through corporate ownership changes, new store concepts and even the pandemic, his faith in the company has remained strong. “Just like many other stores, we got hit hard with the pandemic. The help [Dunkin’ Brands] gave saved a lot of stores,” says Omid. “I tell people, they didn’t have to do that. But they did, and it was amazing.”

His two stores sit in the shadow of Harvard Business School. As the university expands its footprint, new development and construction is changing the face of the neighborhood. But Omid’s team serves a regular mix of faculty, students and construction workers. He recognizes and appreciates the loyalty Dunkin’ customers have to the brand. “People hear Dunkin’ and say ‘I can’t go without this, can’t go without that,’” Omid laughs. “You feel proud to say you’re a franchisee, and that’s important.”

Part of that pride also comes from the community work he has done outside his stores. “I’ve always been passionate about helping people however I can,” he says. Omid serves on the board for the American Red Cross’s Massachusetts chapter. He served as northeast Co-Chair and Treasurer of the Dunkin’ Donuts and Baskin-Robbins Community Foundation and northeast Co-Chair of the Joy in Childhood Foundation. He is also a member of the Dunkin’ Advertising Committee for the northeast region.

Just as he did all those years ago as a hopeful teenager sweeping the parking lot and dreaming about his future, Omid is always looking ahead. He plans to expand his business over the next five years. “I always have to look forward. I think that has to do with how fast I had to grow up. I didn’t have the luxury of looking back too much.”

For now, he is grateful. His parents and his wife’s family are here. He is raising his son here. He is an American. “There are times in your life where you say ‘why did this happen to me?’ I always come back to the belief that things happen for a reason. You have to be patient and dream big. I did. I am the American Dream.”