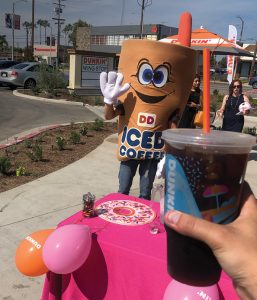 Go west, young man,” has been the call since the frontier days, along with the belief that more opportunities are available out west for pioneering spirits. This has proved true for Dunkin’, as the chain celebrated the opening of its 100th store in California, the land of the gold rush – and a rush of coffee drinkers as well. Four out of the five top cities for highest average coffee spending are in California, including Fremont, Irvin, San Francisco and San Jose, according to WalletHub. In San Francisco alone, there are 1,062 coffee shops, including chains and boutique coffee brands which enjoy cult-like followings of fans. In such a saturated coffee klatch, making a foothold is an accomplishment indeed for Dunkin’, a traditional east coast fixture.

“It’s a hard won waypoint,” says DDIFO Restaurant Analyst John Gordon, of Pacific Management Consulting Group. “The first 50, 100, 500 units are always the most difficult for a popular branded concept like Dunkin’,” says Gordon, adding, “California is a massive market that will take decades to fully develop.”

In June, a Dunkin’ shop in Santa Ana became the 100th to open in California, a milestone proudly marked by franchisee Parag Patel, who also was the first to open a Dunkin’ next-generation concept store in the Golden State last year. Santa Ana has more adult coffee drinkers per capita than any other city in the country, so the location of the 100th Dunkin’ store is bound to attract coffee drinkers.

“We are thrilled to be a part of Dunkin’s next generation location initiative and incredibly proud to be opening the brand’s 100th location in California,” Patel said in a company press release.

The significance of Dunkin’s success outside of “fortress markets” in New England and New York underscores the success of the company’s strategy of developing in a disciplined, contiguous direction; growing west; and filling in the landscape with stores is working, according to Bruce Clark, a professor of marketing at Northeastern University’s D’Amore-McKim School of Business. And as California goes, so goes the rest of the U.S. The left coast often sets trends for the rest of the nation – things like fashion, food, cars, media and technology –so the fact that savvy West Coasters have embraced the distinct smooth, sweet, and easy-to-drink flavor of Dunkin’ coffee says a lot. California’s ability to sniff out trends is one reason Dunkin’ chose to test its shortened moniker and single word sign (Dunkin’) at a store in Pasadena.

If to prove the point, one of the first 100 customers at the Santa Ana Dunkin’ was brand first-timer Brian Harrington, a California millennial who described himself as a “multi-hyphenate hipster: entrepreneur, film producer, actor, and consultant.” An avid coffee drinker and gold card member at Starbucks, Harrington has an eye on where his favorite coffee locations are, noting how there are as many as 10 different Dunkin’ shops close to his hometown of Anaheim. He attended the Santa Ana 100th store grand opening because friends and co-workers “had been buzzing about Dunkin’.” Harrington ordered a large Cold Brew, and said he was impressed with the vibe at the new Santa Ana store. “[It’s] more than a coffee and donut only place.” The Go2, $2, $4 or $5 food menu also immediately caught his eye. 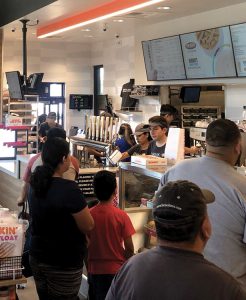 Prior to the 100th store opening, Patel had already opened several Southern California Dunkin’ shops, including the state’s first Next Gen concept store in Corona; his network of more than 20 shops includes locations in Maryland and Washington, D.C. He and his father, Harry Patel plan to develop additional standalone Dunkin’ locations in Orange County.

“The Southern California community has been more than welcoming,” Patel said in a Dunkin’ press release. His family got into the system more than 30 years ago, and Patel credits his family’s extensive experience in the restaurant industry for their successful west coast expansion.

“Each new restaurant we open is just as exciting as the first,” Patel said.

Competition being what it is, it’s unclear whether that number is a moving target. The National DCP’s distribution center in Phoenix continues to expand to support development in California and other states, but even with better logistical support and 100 stores in its pocket, experts say California won’t be easy picking.

“It’s not smooth sailing yet,” says Gordon. The current 100 shops are scattered among several major markets, and more shop density is required before certain consumer and marketing efficiencies take hold. “In terms of getting sites, sometimes it is a waiting game, waiting for an older QSR to close and then capturing the lease,” Gordon says, noting other obstacles such as labor costs and access to minimum-wage workers. Flash back to the early 2000s, when the dozen or more shops that had opened in the California were shuttered because of poor sales. The only remaining outposts were in isolated locations—a marine base in Oceanside, the Embassy Suites in San Diego and a rest stop in Barstow. But in 2015, Travis launched a Dunkin’ expansion, moving from contiguous markets in Phoenix and Las Vegas to southern California. Then the company pushed from San Diego up to Los Angeles, then into Palm Springs and along the coast into the Bay Area. Dunkin’ used its experience with its 464 Baskin-Robbins in California to help push the expansion.

And, having reached this important milepost, Dunkin’ is planning to open 1,000 new locations across the nation next year — 90 percent of which will be located outside of its core markets and west of the Mississippi. Dunkin’s chief marketing officer Tony Weisman even hinted Dunkin’ could eventually land in Starbucks’ hometown of Seattle, according QSR magazine. With that, the western frontier could be secured. Go west, indeed.