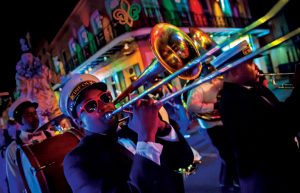 Of the millions of people who travel to New Orleans every year, you might be surprised to learn that less than 15 percent visit for a conference, convention or trade show. While the influx of business travelers continues to swell, along with all other visitors to this fun-loving and historic city, so do the vacation travelers. You might also be interested to know that in a city known for its restaurants, operators of quick service establishments face serious obstacles to success.

In selecting New Orleans as the destination for the 2018 National Conference and Franchisee Hall of Fame luncheon, DDIFO wanted to provide its members with a new venue in which it could offer high-level insight into issues of importance to franchisees across the country. It also wanted members and guests to have a great time.

Now in its 8th year, the DDIFO National Conference has established itself as a place where Dunkin’ Donuts franchise owners can gain new perspective on the QSR industry in general, and the Dunkin’ business in particular. Unlike brand-sponsored events, the DDIFO National Conference provides franchisees cover from the eyes and ears of the brand and offers a chance to dive deep into topics that may or may not be on the agenda for brand advisory council meetings.

This year, DDIFO will again provide new perspective on the QSR business with insight from Andrew Puzder former CEO of CKE Restaurants, parent company of Hardee’s and Carl’s Jr. Puzder, whose second book was just released in April, will be closing the DDIFO conference with a keynote address. Nominated for Secretary of Labor by then president-elect Trump, he still speaks as a media spokesman for the White House.

2018 marks the year Dunkin’ Brands launched its “next generation” shop, designed to tap into technology and alter the customer experience. DDIFO wants to provide an unvarnished view of these new developments and will feature a conversation with franchisees that have opened – or will soon open – a Next Gen location.

Over the years, the association has closely examined the legal and regulatory issues that impact Dunkin’ Donuts franchise owners. This year, there are several legal cases that directly affect Dunkin’ Donuts Franchisees. One of them, which was detailed in an earlier issue of this magazine, zeroes in on concerns familiar to all franchisees: encroachment and cannibalization. The case of El Pollo Loco, a Mexican-themed restaurant, and its efforts to develop corporate stores in the backyard of a franchisee’s territory, demonstrated that courts recognize the need for a level playing field among franchisees and franchisors. Attorney Robert Zarco, who successfully defended El Pollo Loco franchisees in their landmark California case, will be one of the speakers at this year’s DDIFO National Conference.

DDIFO is always hopeful executives from Dunkin’ Brands will agree to speak at the National Conference, but, again this year, our invitation was not accepted. Nevertheless, talks are ongoing with other notable and knowledgeable business experts who will provide insight to nourish what promises to be a fun and memorable gathering in the Big Easy. We invite you to read more about New Orleans.