By Cathy CassataPublished May 1, 2020Category Small Regular – No Sugar! 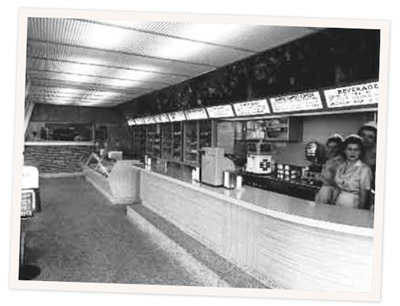 Bob is the kind of regular customer familiar to every franchisee in the Dunkin’ system. For over 40 years, he’s been stopping by for coffee every morning at the Dunkin’ shop in Quincy, Mass. When Victor Carvalho, who along with his brother Octavio, took over running the original Dunkin’ store location from their dad, they remodeled it in 2012 to include retro features resembling the original 1950 store, Bob was there for opening day.

“It was like déjà vu in a few ways. [It was] not only the look of the store, but Bob always sat at the very end of the counter drinking his coffee. We weren’t opened 10 minutes, and I look up and there he is in a retro stool at the end of the retro counter. He was so excited about the look,” says Carvalho.

When Jose Carvalho bought the store on Route 3A (also known as the Southern Artery) in 1979, it was already a busy and popular location, but all the original design features were gone. Counters, ceramic cups and saucers were gone, as was the original donut with the handle. Carvalho didn’t see the history so much as the opportunity when Bill Rosenberg’s first store came up for sale.

“It was a life-changing decision for my father to get into the business and it was the luck of the draw that when he was ready, the opportunity just happened to be the original location for Dunkin’,” says Carvalho. 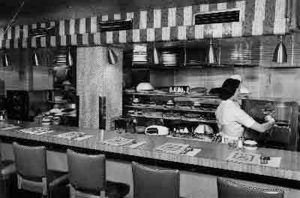 A counter of charm and nostalgia

During Carvalho’s 2012 remodel, Dunkin’ Brands assisted in designing the store to include original features, such as the vintage sign, a wall covered in stainless steel and a replicated counter with retro stools.

“The counter top is the actual look and color of the original, but it only fits seven or eight people in stools, whereas back in the day you probably had 25 stools,” says Carvalho. “It still really brought a lot of charm and nostalgia about what the brand meant and what the times meant.”

Customers of the 1950s and 1960s would cozy up to the counter at their local Dunkin’ Donuts, stirring their coffee with a metal spoon and flicking their cigarette ash into an empty ash tray. People would linger and chat—with their fellow customers and with their counter server. It was a truly different era.

“Restaurants wouldn’t exist if they didn’t have a social function. Socializing is one of many reasons people go to restaurants and that hasn’t changed over time,” according to Paul Freedman, PhD, professor of history at Yale University.

Just because people now get their coffee to go doesn’t mean they are necessarily busier now, notes Freedman. “It’s not so much that life was slower. People might work harder physically, at their job or in a home without all the modern conveniences. It’s just that people in the 1950s and 60s typically didn’t have to navigate long commutes and weren’t expected to bring their office work home. Back when people sat at counters to have coffee, multi-tasking had a whole different meaning.

“You might read the newspaper while drinking the coffee, but they had more unfocused time than we do now. They did not have the sense of, ‘What do I have to do next?’ or ‘I can’t daydream,'” says Freedman, adding people today have leisure time, but spend it on screens.

Origins of the counter

Counter service can be traced back to the late 19th century when drug stores, which were independently owned by pharmacists, served drinks from soda fountains. People visited their local drugstore for a remedy to cure their illnesses. Since there were no laws to regulate the drinks, many times they consisted of caffeine and cocaine, along with herbs and flavorings.

“These non-alcoholic or supposedly good-for-you drinks would be equivalent to energy or vitamin drinks today,” Yale’s Freedman says.

Soda drinks continued in popularity until the mid-1950s. Over time, the soda drinks became regulated and turned into soft drinks served at diners with counters and stools.

“You could get a grilled cheese sandwich with your drink. These tended not to be open for dinner, but just breakfast and lunch. Coffee shops would be places equivalent to that,” says Freedman.

Lunch counters became especially popular at large retail stores like Lord & Taylor, Marshall Field’s and Woolworth’s. Moms could take a break from shopping and treat their children to a meal or a snack. In the South, they became the site of civil rights protests, the most famous of which occurred at a Woolworth’s in Greensboro, NC. African Americans held sit-ins at lunch counters in areas designated for “whites only,” insisting that they be served food and beverages.

“Woolworth’s was chosen because it was a national corporation and could draw attention to the fact that blacks were not served. Sit-in meant that black people sat there rather than standing or picketing,” says Freedman.

As significant as the sit-ins were, Marcia Chatelain, PhD, author of the book Franchise: The Golden Arches in Black America, says they contributed to restaurants moving away from counter service.

“When the Civil Rights Act of 1964 was passed and put a federal law in place to end segregation, some restaurants didn’t want to have to deal with having to seat people separately or have to move customers from a format of having different dining facilities or seats, so they just got rid of [the counters],” Chatelain says. “In some ways, drive-thrus and take outs were a reaction to the government saying, ‘We can no longer segregate people.'”

Styrofoam, carry out and drive-thru kill the counter

In 1960, the Dart Company created the insulated cup, effectively changing forever the relationship people had with a cup of coffee. By 1963, people were taking coffee with them to go and, wherever they were going, the coffee stayed hot. People were no longer restricted to having hot coffee at home, at the office, or at a restaurant.

While Freedman acknowledges the insulated cup contributed to how people drink coffee, it was the rapidly increasing pace of life, he says, that really caused the counter’s demise.

“Fewer people want to sit down and have lunch. If they work in an office, the tendency for meals [decreases] in importance and snacking or breaks or grazing [becomes] more important,” he says, noting the ease of getting a quick drink or snack when they want it, in person or by delivery.

According to Chatelain, McDonald’s moved to paper packaging, away from silverware and dishware, to save money even before Dart hit the mark with its foam insulated cup.

“When the McDonald’s brothers retooled their formula for the restaurants, they got rid of these items because they could get broken, stolen and someone had to wash them. They went to to-go cups and paper packaging, so a lot of what we see today in terms of food being served in disposable flatware and silverware is because the food industry realized it was the most cost-effective way to get customers in and out and you didn’t have to hire dishwashers,” she says.

The widespread use of foam packaging to keep food hot for a longer period of time shaped how the fast food industry delivered food to consumers. “Being able to take food out, and for it to remain warm in the car so you can eat was a huge change,” she says.

Once the 1970s came and the car culture rooted in the 40s and 50s bloomed with the creation of a modern highway system, businesses started to experiment with the drive-thru window.

“A lot of early fast food restaurants were in the suburbs where people were driving into more and more. The social factor and changes of the civil rights movement, the growth of bedroom communities and suburbanization, expansion of the highway system, and desire to cut costs all influenced how businesses then delivered food,” says Chatelain.

The death of the fast food counter was complete.

Although counter service remains a staple of the diner other family-style restaurants (and shouldn’t be confused with a bar where food is served), it is relatively rare in chain restaurants. Still, it has a huge novelty factor. Carvalho says his retro counter pulls at customers’ heartstrings more than he anticipated.

“When we remodeled the Quincy store, I was naive and thought the first 90 days people would come and look. Here we are eight years later and we still have people coming to take pictures inside and outside by the sign and the counter,” he says.

A seaside town rich in history, Quincy attracts a lot of tourists. The store on Southern Artery is advertised as a piece of history and is pointed out by guides on local trolley tours. Carvalho says the store attracts those spontaneous customers, as well as those for whom a visit to the original Dunkin’ and a seat at its counter is a piece of nostalgia they can’t ignore.

“Some people know they are coming to the Boston area and make it a plan to come to the store. We’re still a traditional store where you order at the register and go sit down. We don’t serve at the counter, but people come in and look around and ask questions,” he says.

He remembers one woman who traveled from Lebanon. Her family asked her to visit the store and take pictures to bring back home because they loved their Dunkin’ in Lebanon. His favorite story, though, is about a woman from Georgia who says she worked at the original Dunkin’ when it opened in 1948.

“When she heard we remodeled it to look retro, she says she had to come see it. She says seeing the store took her back to a time when things were simpler,” Carvalho recalled.

While times were indeed different, he says what’s remained the same is Dunkin’s desire to cater to customers’ lifestyle needs.

“We weren’t on the run like we are today, so a cup of coffee was a more relaxed sit-down event. Today, we’re America’s No.1 on-the-go brand because that’s what people want. We’ve created that expectation of, ‘I know I can hit that Dunkin’ and be in and out in two minutes or I can hit the drive-thru if I need to,'” says Carvalho.