By Debbie SwansonPublished May 1, 2020Category Features 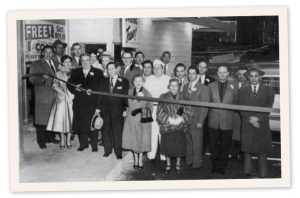 Forget the Coolattas; skip the sandwiches; it’s not about the bagels (or the donuts). Dunkin’ Brands runs on coffee, which is why “America Runs on Dunkin’.” Perhaps no beverage is more intertwined to people’s lives than coffee. Whether one drinks it black, with a mocha swirl, a shot of almond milk, or “regular,” coffee is something people love—especially Dunkin’ customers. So how did ground, roasted beans brewed with cold water attain such celebrity status? Dunkin’ Donuts had it all figured out years before (Starbucks CEO) Howard Schultz was born.

The Birth of It All

Dunkin’ coffee was never an afterthought; when founder Bill Rosenberg opened his first restaurant, Open Kettle, in 1948, a quality cup of coffee ranked high in his mind from the start. It was a time when Americans were eager to embrace good coffee; wartime rationing at the start of the decade had forced families to adapt creative measures to stretch their yearly retail coffee limit (10 pounds for each person over age 15).

“Rosenberg demanded only the very best Arabica beans, when most of the world was using cheaper, second rate beans. Rosenberg’s blend was expensive, and he charged a premium retail price,” says Mark Dubinsky, past board member of the Northeast DCP. At the time, Open Kettle was charging a full dime for a cup of coffee, about twice the going rate at similar coffee shops. “Bill used to say ‘people are willing to pay for quality,’” Dubinsky adds. 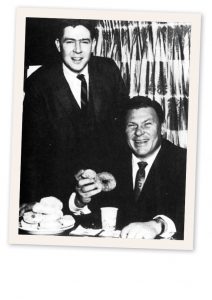 Rosenberg developed his early blend with Marty Elkins, from Elkins Coffee in Concord, NH. Open Kettle became a success, and in 1950 Rosenberg changed the name to Dunkin’ Donuts, a nod to his customers’ habit of pairing the two popular products—especially those donuts with a dunking handle. Over the next two decades, as franchising took hold, more restaurants sprung up. By 1979, there were approximately 1,000 Dunkin’ Donuts shops.

“In the 1990s, Dunkin’ sourced from New England Tea and Coffee, of Malden, Mass., which was a nice, family owned business. Dunkin’ was perhaps 80 percent of their business,” recalls George Zografos, who has a vast knowledge of the history of Dunkin’ coffee. He worked for Dunkin’ Brands for nine years, before buying his own shops. He also served 10 years on the board of the Northeast DCP, Dunkin’s supply chain.

“[The DCP] knew that having one supplier wasn’t smart. Also at the time, flavored coffee was beginning to get popular. We decided to pick up a second supplier, and we chose Mother Parkers from Toronto, another family owned business. They began to supply about a third of our regular coffee, New England Tea and Coffee picked up the rest, as well as the flavored coffee,” Zografos recalls. By the mid-90s, hazelnut and French vanilla had become fixtures on the Dunkin’ menu.

Eventually, Dunkin’ chose to bring more suppliers on board, adding S&D coffee, a North Carolina roaster and one of the largest in the country. A fourth, Massimo Zanetti Beverage, was added later. But, while Dunkin’s vendor portfolio has evolved over the years, the taste has remained consistent.

“Dunkin’ has a strong spec, so the taste stays the same, even when they change suppliers,” Zografos says.

From staple to superstar

During the 1980s and 90s, Dunkin’ began selling more coffee. Consumers were enjoying a hot cup or an iced coffee throughout the day. Zografos attributes this growth to a couple of factors: a popular breakfast special, and a change to the chain’s development strategy.

“Around this time, Dunkin’s ‘Big One breakfast special’ was popular in New England. It was a 14 ounce coffee, a donut, and small orange juice for 99 cents,” Zografos says. Notable was the cup size; typically, customers choose either 6 or 10 ounce, but with the special, they could trade up to the larger cup. “That special really drove coffee sales.”

During this same period, Dunkin’ started selling territories, instead of smaller development rights to open in a city or town; this gave franchisees more leverage. With multiple stores in one territory, Zografos recalls, great-tasting Dunkin’ coffee became more widely available.

“Dunkin’ was at about 3,000 stores after 50 years in business. Once they started selling territories, in just three years, this doubled to 6,000 stores,” Zografos says. “It made the coffee business really take off. With more points of distribution, it was more convenient for customers to get coffee, and coffee became a higher percent of [sales].”

Ice also fueled Dunkin’s growth as a coffee brand. A staple of New England summers in the 1980s, iced coffee from Dunkin’ Donuts began to defy the calendar and grow into a year-round phenomenon. As Zografos remembers it, one man really pushed the concept. “John used to wear a tee shirt that said ‘Rhode Island is the iced coffee capital of the world,’” Zografos says, referring to DDIFO Hall of Fame franchisee John Henderson, whose Ocean State stores were the first to promote iced coffee in December.

At that time, franchisees would brew a pot of coffee and pour it into a jelly bucket in the back of the store, then cool the bucket in the refrigerator before placing it in an urn to serve to customers. Eventually, according to franchisee Bill Daly (who is featured in this magazine on page 22), franchisees started double-brewing coffee – using twice the grounds – so it wouldn’t taste watery when it was poured over ice. But, as Daly recalls, it wasn’t until stores could secure heavy-duty ice machines to keep up with demand that sales really soared.

When Dunkin surveyed customers in January 2012, 84 percent reported drinking more iced coffee than they did the previous winter. And 86 percent reported drinking more as compared to three winters prior. Just last year, those in the know about iced coffee threw a flag on the Twitter account of @DunkinBoston, when the supposed fan posted this message in early March, “Spring is officially here, Boston! Are you switching back to Iced Coffee?”

Numerous fans shot back, taking to the platform to protest that they had never departed from the frosty brew.

Prior to the 1970s, drive-thru windows were a rare sight; people would more likely have window service at a drive-in restaurant than grab and go. Coffee was not really for drinking in the car. But times were changing; children were going to more activities, stay-at-home mothers were joining the workforce, and single-parent households weren’t uncommon. Speed and convenience were becoming higher priorities. In the mid-70s, McDonald’s opened its first drive-thru window. Awed by the ability to serve more customers, staff fewer employees, and let customers remain in their car, other fast food retailers soon followed suit.

Soon it became obvious that the drive-thru window and the coffee shop were the perfect marriage. By the 1980s, most cars came equipped with a cup holder that easily enabled one’s coffee habit while on the move. The groundwork was in place to support the oncoming wave of coffee-on-the-go aficionados.

New York franchisee Luis Ribeiro remembers some of the early drive-thru windows when he first moved into the Rochester market. “There was one drive-thru in the area, with what was literally a handwritten note on the menu board, telling customers to pull up to the window and ring [a bell] to place their order,” he recalls.

By 2016, nearly 6 in 10 Dunkin’ locations came with a drive-thru, and those that didn’t recorded lower sales almost across the board, a fact underscored by a special report in QSR Magazine which featured the headline, “Sales volume skyrockets—nearly 25 percent—at locations with a drive-thru.”

Both the actual window and operations have modernized to keep up with the adoration of drive-thru coffee. Traditional glass carafes were replaced by high volume brewers, which were more capable of providing a continuous flow of coffee at the ready.

“That switch was necessary due to the popularity of the drive-thru. Most stores did not have enough physical space for the number of carafes needed to keep up with drive-thru demand,” says Zografos.

Like most changes, there was some initial resistance to the new machines. Customers, who for years had become used to lazily watching their coffee poured from a glass carafe, had to adapt to a less home-like presentation. Employees, always mindful of time, had to curb the temptation to pour anything until the entire brew cycle was complete, less the whole pot of coffee be ruined.

“When you have a line of customers waiting at the drive-up that could be hard to do,” Zografos says.

Today, few customers would remember the glass carafe, and modern high volume machines don’t enable any interruption until the brew cycle is complete. The high volume machines, also credited for yielding a more consistent result, are here to stay. On-the-go ordering, introduced in 2016, further strengthened their need. Earlier this year, Dunkin’ Brands CEO Dave Hoffmann announced plans to invest $60 million in high-volume brewers, supporting the brand’s commitment to beverages, but nothing solidified Dunkin’s position as a coffee-first brand more than the company’s decision to drop “Donuts” from its name.

Over more than a half-century, as coffee has gained a prominence in people’s lives and a following at all hours of the day, Dunkin’ has been there to brew it up. More than creating just a drink to warm the morning or cool the afternoon, Dunkin’ has fostered a feel-good habit, enjoyed all-day, at home or on-the-go, and with countless taste combinations. Always delicious and always served quickly, Dunkin’ coffee consistently ranks atop national polls. Customers love it and – for all the right reasons – so do franchisees.