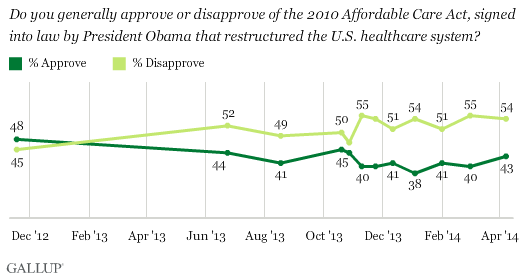 Sign-ups for the Affordable Care Act via the HealthCare.gov website through the March 31 deadline are reported to have reached the target goal of 7 million, but a Gallup report released just last week still shows that 54 percent of all Americans oppose the mandate while 43% support it.  A closer look at the results indicates support is largely partisan in that 80% of Democrats approve while 87% of Republicans disapprove of the mandate.  Independents oppose the mandate by a 65 to 32 percent margin.