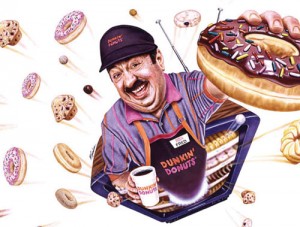 Bob Rosenberg remembers “The Pledge.” The year was 1964, Rosenberg had taken over the day to day operations of the food companies his father founded and was dismayed to learn that some Dunkin’ Donuts restaurants served stale coffee and donuts. He hired a New York ad firm, Daniel & Charles, to develop a commercial in which Dunkin’ promised to brew fresh coffee every 18 minutes and bake fresh donuts every four hours. The campaign, Rosenberg remembers, was for an inside audience. He wanted to change behavior within the company; brand building and customer loyalty, he says, would come later.

Advertising has always been an important part of Dunkin’ Donuts success. Regardless of whether the company was privately held or publicly traded, money has always been allocated to local and national advertising. Whether it was printing coupons in local newspapers, buying ads on national broadcast networks or placing signs at major sports arenas, Dunkin’ has run on advertising.

“Advertising has definitely paid off,” says Joe Prazeres, a long-time Rhode Island franchise and chairman of his local Ad Committee.

He ticks off the strategies that have worked in his market: coupons, local TV ads, local radio ads, signs at McCoy Stadium, home to Minor League Baseball’s Pawtucket Red Sox and naming rights at the old Providence Civic Center, now the Dunkin’ Donuts Center, affectionately known as “The Dunk.” Prazeres is quick to point out that the Rhode Island market is somewhat different than newer, less concentrated markets, but he sticks by his belief that advertising works.

Decisions on how to spend advertising dollars rest with the local ad committees, comprised of franchisees and marketing experts from Dunkin’ Brands. Five percent of a shop’s total sales are put into the ad fund—with at least two percent earmarked for local spending. Rosenberg remembers the skirmishes that ensued when the company tried spending more on national advertising and less locally. He felt, at the time, that outlying markets were withering while “fortress markets,” as he categorized Boston and Providence, were thriving because of an abundance of local ad spending.

“It was hard to advertise outside of the local marketplace and it was hard to wrestle money away from local committees to spend on national cable ads,” he says. To this day, Rosenberg believes Dunkin’ Donuts would have developed into a national brand before he retired from the business in 1998 had the company pursued a consistent national ad strategy. He cites Domino’s Pizza and Sonic Restaurants – two companies for which he sat on the board of directors – as examples of what could have been with Dunkin’.

Still, it’s hard to argue with success. As Dunkin’ Brands continues its march westward, filling in the white space on the map and promoting the phrase, “America Runs on Dunkin’,” the company’s valuation remains strong and franchisees in many local markets report growing unit level sales. 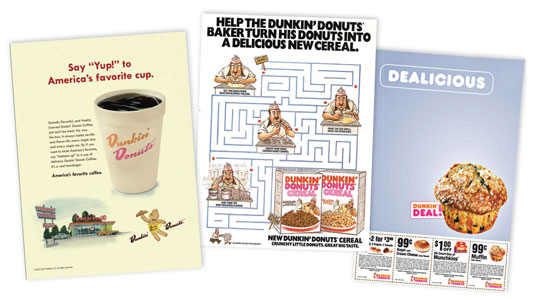 “For a little company we were pretty sophisticated way back then,” Rosenberg remembers proudly. The Dunkin’ Donuts brand evolved in major markets along the east coast, Midwest and Southeast after franchisees followed through on the Pledge to make fresh coffee and baked goods. National advertising drove brand awareness while local advertising built customer loyalty. Then another evolution helped impact how Dunkin’ franchisees would allocate funds for future advertising.

In 1974, as a result of the Arab oil embargo and surging commodity prices for coffee, sugar, beef and grains, the average market basket cost of goods rose dramatically for Dunkin’ Donuts franchisees. Rosenberg and his team decided Dunkin’ Donuts should raise its prices to compensate. Consumers responded by cutting back and sales fell. That prompted the company to explore new ways of procuring and distributing its goods. The Distribution Commitment Program (DCP) enabled Dunkin’ to cut out the middleman and procure goods directly from the distributor. It proved successful and Dunkin’ Donuts franchise owners saved almost 10 percent on their cost of goods and boosted sales by three percent. Rosenberg saw the opportunity to use that money to enhance the brand building effort through additional advertising. Franchisees agreed. That was the beginning of the two percent national advertising allocation. Rosenberg credits the franchisees for reinvesting their money.

“A small-minded guy would have taken the money and run with it,” he says. “They could have played small ball, but they played big.”

“They said we could build sales and fend off competition,” says Prazeres. “Franchisees always like to spend money in their own market but they realized they could buy media at a better price by purchasing nationally.”

“We wanted to be on TV nationally at least 26 weeks of the year,” Rosenberg says. “It was clear when we had more ad weight, it translated into higher sales per store.”

All they needed then was a great ad campaign. 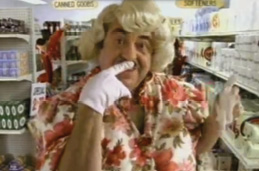 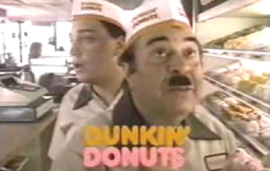 Rosenberg and his team developed a new campaign with their New York ad firm, complete with a voice-over from acclaimed actor Hal Holbrook. No one knows if that campaign would have been truly successful for Dunkin’ Donuts because, at the same time, they also experimented with a new spot featuring a character known as Fred the Baker.

Michael Vale had a solid acting resume by the time he came to the audition for Dunkin’ Donuts. He had appeared on TV and on stage and was currently featured as Sam Breakstone, the fictional owner of Kraft Foods’ Breakstone Sour Cream and Cottage Cheese. As the story goes, the ad agency was keen on actor Lou Jacobi for the role as Fred, but once Vale spoke the line, “It’s time to make the donuts, time to make the donuts,” the agency flipped and Vale wound up with the role that would change his life and redefine Dunkin’ Donuts forever.

“Dunkin’ Donuts has a personality and it’s one I want to be connected to. It’s as if Dunkin’ is a friend of mine,” says Deborah Utter, a senior lecturer on advertising and marketing at Boston University’s School of Management.

Dunkin’ made hundreds of commercials with Fred the Baker. He was synonymous with the brand and people loved him. When Dunkin’ shifted into a beverage strategy, there was Fred saying, “It’s time to make the coffee.” He introduced bagels and muffins and even a Dunkin’ breakfast cereal.

“You would see Fred in a commercial for a new product and almost immediately we would see a jump in sales. It was great,” says Prazeres.

An Evolution in Advertising

The media landscape is a lot different today than it was when Fred the Baker burst onto the scene and that can present challenges for companies looking to saturate the public consciousness with messages about their brand. According to the Poynter Institute, one third of adults under 30 get their news from social media. That means reaching beyond traditional means to generate brand awareness and build a new generation of loyal consumers. Dunkin’ Brands has successfully navigated the social media landscape to reach those customers who watch TV on Netflix and get their news from Facebook.

“Dunkin’ Donuts is one of a handful of national brands that’s trying, engaging, and getting it mostly right,” says Utter. But, she is quick to point out that local advertising still matters, especially in emerging markets. “There is a certain excitement when a brand comes to a new community and local advertising helps build that excitement. It can get consumers interested in trying something new, which gives franchisees a chance to build loyalty.”

Prazeres agrees building customer loyalty – even in mature markets like Providence – is important. “We don’t have the lowest prices and we have a lot of competition trying to steal business with cheaper coffee. The only way to fight them is through loyalty,” which is why, he says, franchisees spend some of their local ad money sponsoring local sports teams, schools and charities, along with other community organizations. In this digital age, where advertising is everywhere, local sponsorships matter more than ever.

As Deborah Utter at Boston University points out, “The goals of advertising include building awareness, getting people involved with the brand, and keeping them involved over time.”

Sometimes that means buying an ad in the Super Bowl, sometimes it means buying the uniforms for a local youth soccer team. Both strategies are hard-wired into the Dunkin’ system. Franchisees provide the money and Dunkin’ Brands provides the expertise. It’s a recipe that’s worked for decades.