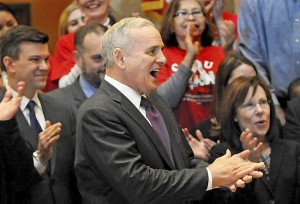 Notwithstanding the swift death the proposed minimum wage increase suffered at the federal level, it is a completely different animal when proposed in state legislatures and city halls across the country. We reported to you last week that a bill would be filed in Albany proposing to increase the Empire State minimum wage to $15/hour and indeed it has.  This week New York state senator Daniel Squadron filed the proposal with the senate clerk’s office.  Aside from filings, laws increasing state minimum wages have been passing state legislatures on a regular basis.  In fact, in the month just ended, several states passed increases to their minimum wage laws.  Minnesota Governor Mark Drayton signed into law a bill not only increasing Minnesota’s minimum wage to $9.50, but also indexing it to inflation.  The rate will increase to $8 this summer, $9 in August 2015 and then $9.50 in 2016.  Future increases will be tied to the consumer price index beginning in 2018.  The Maryland Legislature this month sent a bill to Governor Martin O’Malley that increases the state minimum wage to $8/hour next January and then annually until it reaches $10.10 in July 2018.   The bill is now before Governor O’Malley, a staunch advocate of the increase and he will sign it into law.  Likewise, West Virginia increased its state minimum this month as well, hiking it to $8/hour effective January 1, 2015 and then to $8.75 in 2015.  And, most recently, Hawaii just passed an increase yesterday, kicking their statewide minimum up to $10.10 over four steps by 2018.  And if these and other state increases in the minimum wage weren’t enough, Seattle Mayor Ed Murray announced a plan yesterday that would see Seattle’s minimum wage increase to $15/hour as early as three years hence for large employers with more than 500 employees and within 7 years for very small employers.   As much as the advocates say they are helping the poor with these increases, there is indeed another side to the story as Seattle waiters and bartenders are urging restraint on raising their minimum hourly wage since they believe hiking the mandated minimum will negatively impact their tips.  On the flip side of the minimum wage coin, we don’t have a lot to report other than the fact that Oklahoma’s Republican Governor Mary Fallin signed a bill this month banning local municipalities from raising the minimum wage.  The measure was prompted by the fact that Oklahoma City was considering establishing its own minimum wage.  The new law also bans local municipalities from mandating a minimum number of sick or vacation days for workers.