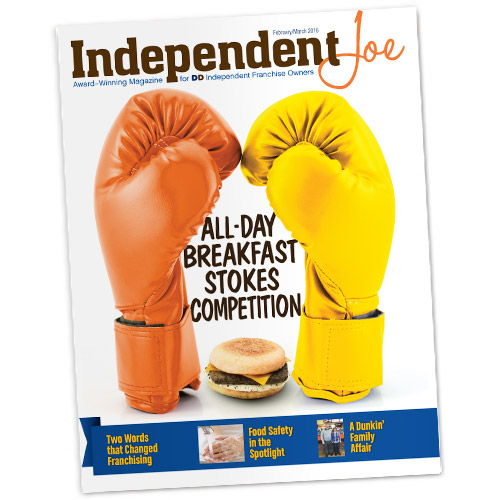 If there’s an extra glow to the Golden Arches of McDonald’s these days, you could say it’s because the morning sun is shining all day. Last spring, McDonald’s was reporting “negative guest traffic” as a cause of its 33 percent drop in net income. This year the world’s largest food chain is basking in the glow of positive earnings: U.S. same store sales jumped 5.7 percent in the 4th quarter of 2015, driven by its introduction of all-day breakfast.

A week after McDonald’s report, Dunkin’ Brands CEO Nigel Travis reported a 0.8 percent drop in U.S. same store sales and identified “recently revitalized quick service restaurant brands, which were actively discounting,” as one cause. He specifically denied McDonalds is to blame for the slowdown.

“We’ve analyzed this to death, and our analytics show that the impact of McDonald’s all-day breakfast is marginal,” Travis told analysts and investors in a conference call early in February.

Be that as it may, millions of Americans saw a shiny, new TV advertisement during the lead up to Super Bowl 50 called “Good Morning,” promoting McDonald’s all-day breakfast. 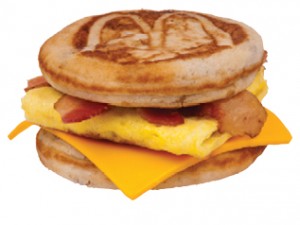 Dunkin’ franchisees have long known that people will eat a sausage, egg and cheese sandwich anytime of the day. The question on franchisees’ minds now is: Has McDonald’s changed the playing field permanently, or is this just a temporary blip?

McDonald’s is hoping for the former. After initiating a company wide restructuring, the chain’s new CEO, Steve Easterbrook, announced McDonald’s would start serving breakfast foods after 10:30 a.m. Now, in the wake of positive headlines, Easterbrook says the launch exceeded their expectations. “It will settle down a little from its launch phase, but we believe that building these other platforms of growth on top of that will keep us competitive in the marketplace and taking share.”

The Q4 results proved what the market research firm NPD Group found when it analyzed 27,000 customers who visited McDonald’s before and after the launch of all-day breakfast last October. It said McDonald’s received a “sizeable lift” in breakfast orders throughout the day, with a third of the people who purchased breakfast items in the afternoon and evening identifying themselves as first-time McDonald’s customers, which experts say is indicative of the menu attracting new customers instead of cannibalizing existing ones.

“Any time McDonald’s makes a move it’s a consequence to everyone because of their size, scope and advertising pool,” says John Gordon, principal of Pacific Management Consulting Group and DDIFO’s restaurant analyst. “There’s only so much demand to eat out in the U.S. There are only so many people and so many calories we can consume. Everyone competes for your stomach, and the stakes at breakfast are high, given competitive pressure.”

However, Gordon wonders even with its latest bump, if McDonald’s will still need to mount an ad blitz for all-day breakfast once the hoopla dies down. “We’re all busy and clouded with information overload, so it takes customers time to adapt their habits and preferences.”

Laura Hallow, associate editor of concept analysis at the foodservice research firm Technomic Inc., agrees, but says that because all-day breakfast was an advantage for Dunkin’, the brand will need to differentiate itself in the face of competition from McDonald’s and other quick service restaurants. (Taco Bell breakfast transactions were up 6% through its December quarter.) 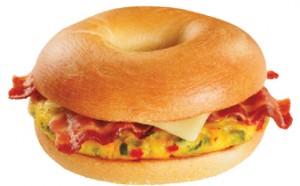 In these early stages, she adds, it is possible Dunkin’ Donuts franchisees are seeing an impact on their sales. “However, I think that excitement will die down and Dunkin’ won’t see that much of an effect on their sales as long as it still promotes and emphasizes the variety of options they have as opposed to McDonald’s limited menu,” Hallow says.

Limitations of a Limited Menu

Both Gordon and Hallow point out that Dunkin’s varied menu choices are a key advantage for the brand. Dunkin’ has a great head start in serving breakfast sandwiches or hash browns all day. Equipment and systems are in place so even a complicated breakfast order can flow through the drive-thru quickly. It’s not really that way at McDonald’s; which is why not every breakfast item is available at every restaurant after 10:30 a.m.

When it first reported McDonald’s all-day breakfast plan, The Wall Street Journal said the company would need to invest between $500 and $5,000 per restaurant into new equipment in order to handle the increased breakfast hours. Across the system, operators are paying for new equipment installation and training to manage the process of serving eggs or McGriddles all day.

Simply put, McDonald’s have not been built to cook a large breakfast and lunch menu simultaneously. That is why, in some locations, operators have to choose between selling French fries or hash browns throughout the day. Since the brand is leaving it up to specific locations to make these changes, offerings will vary depending on which McDonald’s you visit.

“It’s not like McDonald’s is launching an array of variety of p.m. breakfast products,” he says. “It’s really about carrying over a small portion of the products that they offer in their a.m. line into the afternoon, so the more noise they make around all-day breakfast and the more they grow and create that p.m. demand for breakfast, the more it’ll play right into our strengths and will have the effect of growing that segment for us, moving new users directly our way.” 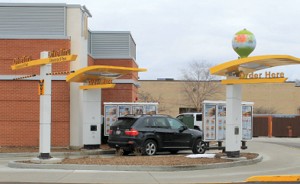 While Dunkin’ Brands considers how to use its marketing and branding muscle to counter McDonalds’ moves, Gordon believes it will take some time to see if and how consumer habits change based on a more crowded breakfast field. In the meantime, Hallow says franchisees can control a few things, including reminding customers that the Dunkin’ menu offers a variety of choices to satisfy different dayparts.

“This could be their time to shine and show customers that while other chains are showing all-day breakfast, Dunkin’ has all-day everything: breakfast, lunch, dinner,” she says.

Going further, Hallow says Dunkin’ should remind its customers that they’re veterans in all-day breakfast. There’s no learning curve for Dunkin’ Donuts and no changes in its day-to-day operations, compared to the significant adjustments all 14,000 U.S. McDonald’s locations are making.

Gordon adds that small in-store changes can have a big impact too. “A weakness McDonald’s has is that they refer to customers by number rather than by name. If Dunkin’ Donuts can call customers by name, it could have a positive impact that differentiates them from other brands,” he says. 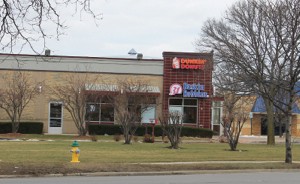 Hallow notes that other concepts besides McDonald’s could pose a possible threat to Dunkin’, especially those offering all-day breakfast with healthier options such as cage-free eggs, locally grown meat, and more. Eastman Egg Company with locations in Chicago and Eggslut based in Los Angeles are two she points out.

“Eggslut has hour-long lines for people to get their breakfast sandwiches,” she says. “Even though they only have a handful of locations, it’s something for Dunkin’ to keep an eye on. I know Dunkin’ is going to offer cage-free eggs over the next few years, but it’s good to see what else others offering all-day breakfast are doing.”

As time goes on, Dunkin’s response to McDonald’s all-day breakfast will become clearer. Until then, Gramm leaves one final thought.

“Think of it as a tremendous growth opportunity for us. We’re a big player in the morning breakfast segment; it’s our strength. We’ve worked real hard on the Dunkin’ side to expand transitional breakfast offerings into our daypart three – or midday – and we’ve had success here, but our real opportunity for growth still remains within this part of the day,” he says.

That’s why he’s all for McDonald’s latest move. “I’m kind of a cheerleader for McDonald’s messaging from the standpoint of ‘you go, McDonald’s. Make as much noise as you want,’ because I do believe we will benefit significantly.”