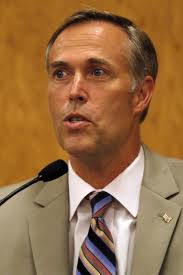 Assemblyman Jared Huffman (D-San Rafael) speaks with Don Sniegowski from Blue MauMau about the fair franchising bill he introduced a month ago to the state of California, AB 2305, the Level Playing Field for Small Businesses Act. The bill was introduced to various committees of the assembly on Tuesday.

Huffman represents California’s 6th state assembly district, which is just north of the Golden Gate Bridge and includes all of Marin and a portion of Sonoma counties. The measure, co-sponsored by Assemblyman Tom Ammiano (D-San Francisco), looks to be one of the most advanced fair franchising bills in the nation.

It is the newest in a wave of state franchise relationship laws that aims to protect against franchisor abuses after the sale of the franchise. Vermont and Massachusetts will also vote on similar fair franchising legislation this year. That’s in addition to the franchise relationship law that was enacted in Rhode Island three years ago. What is at the heart of these new laws are complaints by franchisees that franchise contracts in the last 20 years have become intolerably lopsided and abusive.

A hearing on the bill will be open to public testimony beginning at 9 a.m., April 17 at the Assembly Committee on the Judiciary Room 4202 in the State Capitol Building in Sacramento. After the sponsors’ testimony, those who have registered their names on the speaker list can testify for or against the bill on a first come, first served basis. Letters of support to the lawmakers in the Assembly Committee on the Judiciary office (contact info) must be received by April 10 in order to be reflected in the bill analysis.