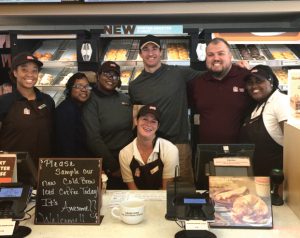 For former NFL placekicker Kris Brown, knowing how to kick a football hard is just as important as knowing how to “kick butt and work hard,” which is the way he describes his second career as a Dunkin’ Donuts franchise owner.

Brown, now 40, played 12 years in the NFL with the Pittsburgh Steelers, Houston Texans and San Diego Chargers, after a record-breaking career at the University of Nebraska. Brown retired in 2011 and became partners with former Houston teammate Zach Wiegert, who had retired in 2007. Together they are developing a network of Dunkin’ Donuts restaurants in Nebraska and western Missouri.

Brown and Wiegert are just two of the growing numbers of current and former professional athletes who moved from sports into franchising, choosing the iconic Dunkin’ Donuts brand.

“We have found that there is an increasing interest from pro athletes, especially as we grow the Dunkin’ Donuts brand across the country,” says Grant Benson, senior vice president of franchising and development for Dunkin’ Brands.

“I’m excited to be working with [Vik] to expand the Dunkin’ Donuts brand in Louisiana, starting with five stores in the New Orleans and Baton Rouge areas,” Brees wrote in an email. “Dunkin’ Donuts is an incredible brand offering friendly service, convenient locations, great value and a fantastic menu of hot and iced coffees, espresso beverages, hot and iced teas, frozen beverages, breakfast sandwiches and, of course, its signature donuts.”

The MVP in Super Bowl XLIV in 2009, Brees knows the qualities that lead to success. IIn his 16 year NFL career, he completed passes totaling an NFL record of more than 5,200 yards; he’s thrown 465 touchdowns and over 66,000 total yards. When describing the value local businesses, like Dunkin’ Donuts, have in their communities, he praised the work of franchisees for keeping local communities thriving. He said he was optimistic his efforts would also spur growth. “I’m looking forward to growing such an iconic brand down here in Louisiana, and to helping build the local economy and create jobs,” he wrote.

If he asks Brown or Wiegert about the transition he may face as he settles into his Dunkin’ career, Brees would probably hear that professional athletes and Dunkin’ Donuts operators follow a path with many similarities.

According to Brown, “There are a lot of qualities you have to possess as an athlete. Clearly, you have to work hard and know how to work. Running a franchise is really following the operational manual, which tells you, ‘This is how to run the business. Take the training and execute the operational manual,’” Brown says. “Working on sports teams and running a franchise are similar; you are bringing a group of people together, setting a vision, and setting some goals.”

Now in their sixth year as Dunkin’ operators, Brown and Weigert have four locations in Kansas City and eight in Omaha.

“We have defined territory in both Kansas City and Omaha, and are contractually obligated to open a total of 17 stores,” says Brown. “It’s nice because when you sign a development agreement, no one else can develop Dunkin’ Donuts franchises in that area.”

It’s a customer base Brown got to know during his two runs to the NCAA Men’s Football National Championship with the Cornhuskers of Nebraska. And, while those days of glory shine brightly in the memories of Nebraskans, Brown says he enjoys a relatively anonymous life as a franchise owner. “I really don’t get recognized today,” he says. “Very rarely, if ever.”

Athletes need to rely on the strength and commitment of their teammates in order to be successful, and Brown says there is a strong similarity in the QSR business. Without question, he says the toughest part of his job is finding the best people to join his team.

“[That] is always a challenge, because everybody looks for good people to retain,” Brown says his longest team members have been with the company since 2013, and one has opened several new stores as the company has grown. How does he manage to keep good people?

“It’s defining our mission. And asking ‘Why does our company exist? What makes people get up and go to work at 5am?’ It’s because we want to energize and reward our guests and our team and our community. It’s about defining those things and getting into alignment so that people have a deeper appreciation and understanding for what we do,” he says.

While Dunkin’ Donuts doesn’t have a formal recruiting program for pro athletes, “we are open to any individual interested in opening a franchise as long as they meet our rigorous franchisee selection criteria,” says Benson. “First and foremost, we look for qualified franchisees with operational experience, strong financial backgrounds, and a passion for their local communities and our brands. We’ve worked with a number of athletes over the years and we’re very proud of the relationships we have with them.”

Dunkin’ Brands also works with the Professional Athlete Franchise Initiative, which presents franchising opportunities to interested and qualified athletes, according to Benson.

For Brown, the brand brings back memories of his childhood near Dallas during the 1980s. “There were some Dunkin’ Donuts stores around where we lived, and we would go in before school and I’d have a maple frosted donut,” he recalls. “Whenever I take a bite, it brings me back to being eight years-old in Plano, Texas. It was emotional. Deciding to work with Dunkin’ just made sense.”

Brown says he was drawn to the notion of working for himself – and being his own boss – during his NFL off-seasons. In addition to staying in shape, Brown worked a number of internships.

“I got a sense of what I liked, and realized that I wouldn’t mind working for myself,” he says. “I liked the flexibility, the time in the off-season with my family. If you got into business for yourself, you controlled your destiny: how much you could make, how hard to work, and if you want to kick butt or not.”

When it was time to retire – and Brown says the day came earlier than he thought it would, in 2011 – his partnership with Wiegert gave him responsibility over business operations, while Wiegert handled the real estate piece. Later, Brown was named CEO, overseeing all aspects of the business.

He says there are parallels between running franchises and running as a professional football player. “Life in the NFL is very structured. From January to December, your life is planned by your team. One of the nice things about working as a franchise owner is that the franchise does provide that structure. It’s already given to you, and that’s a fit with a lot of professional athletes, because they are already have that structure.”

Working with Dunkin’ Donuts has been positive, he adds. “It’s been a great experience, and the brand has been great to work with. We’ve built 12 stores and we hope to continue for many more years to come.”