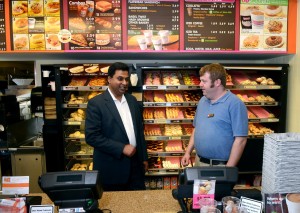 Arun Mandi, left, of Voorhees, talks with Robert Baldwin, of Somers Point, general manager of the new Somers Point Dunkin’ Donuts on the former Sonic site. Mandi has 24 stores in the area and is renovating them and moving them to choice locations with drive-throughs. Photo by Danny Drake

Kevin Post of The Press of Atlantic City reports that Dunkin’ Donuts franchise owner Arun Mandi was on the threshold of what many people consider a dream career in computer engineering.

But instead, Mandi decided to work in quick-service restaurants, better known as fast food to consumers.

“I started working in Dunkin’ Donuts when I was going to school for my master’s in computer engineering, part time to fund my tuition for college,” Mandi said. “After I graduated with my master’s degree, I decided engineering was not for me.”

So he returned to working as a Dunkin’ Donuts crew member to learn the business.

“A lot of my friends went to work for companies such as Texas Instruments and American Airlines, and they said, ‘Are you crazy? What are you doing working for $6 an hour?'” Mandi said. “I got laughed at, but I did what I felt like I wanted to do.”

Mandi, 45, is the donut king of Atlantic County, with 24 Dunkin’ Donuts stores either in the county or elsewhere in South Jersey.

And he’s far from done.

Read More at: The Press of Atlantic City