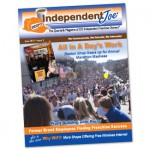 Have you ever had the feeling you’ve uncovered a well kept secret? That’s just how some Dunkin’ franchise owners feel once they try the equipment sold by DDIFO Sponsor, Wilbur Curtis. While the company has been manufacturing coffee brewing and grinding equipment since 1941, they are a relative newcomer to Dunkin’ Brands. Combine that with a company name that bears the name of its founder, “Wilbur Curtis,” but that is commonly referred to as “Curtis”, and you may understand the challenge presented while trying to order Curtis equipment through the DCP.

Frank Callis of Royston, LLC took a big risk while speaking to a group of franchisees at DDIFO’s member meeting in September. The theme of the meeting was cost-cutting and improving the bottom line, and while the speakers who preceded him stayed on point citing several short-term money saving examples, Frank took a different tact. He boldly suggested franchisees take a longer view of their cabinetry purchase and invest more upfront in Royston’s modular metal cabinetry.