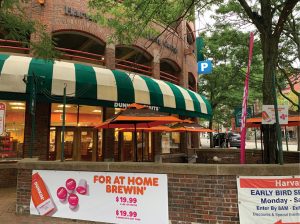 In late May, with cities and states loosening shelter-in-place restrictions brought on by the coronavirus pandemic, Dunkin’ Brands announced it was ready to examine how to best reopen its seating areas. In a blog post dated May 29, Dunkin’ wrote, “We are now exploring the most judicious ways to once again offer in-restaurant dining,” emphasizing, “Our number one priority has been – and will remain – the health and safety of restaurant employees and guests.” A day later, at a business roundtable hosted by President Trump, Dunkin’ CEO Dave Hoffmann emphasized how the brand has “rallied around that mantra of ‘people over profits,’ and doing the right thing.”

Even as the United States was shut down and sheltered in place, Dunkin’ franchise owners kept the majority of the chain’s restaurants open. Franchisees – battered by uncertainty, surrounded by fear and compelled to include hazard pay in their workers’ paychecks – adapted to a new extra-clean, masked reality in order to keep on delivering fresh coffee and tasty snacks. By the time things had started loosening up, and people started venturing out of their homes and back to work, franchisees were able to more clearly assess the impact of the coronavirus crisis. For two veteran Dunkin’ franchise owners, the outcomes could not have been more different. One owner fared well because of a solid drive-thru business; the other had been punished by the pandemic’s cruelty because his network had no drive-thrus.

The Carvalho family network has 20 stores mostly in dense urban centers around Boston, like Harvard Square and Watertown Square. Many customers walk into their stores from their homes or offices; others stop by on their way to their public transit stop. Some of the family’s shops are in strip centers, but are not outfitted with drive-thrus. “We’ve been hit hard,” says David Carvalho. “It’s been very difficult. Drive-thrus have been the only game in town.”

Massachusetts was one of the states hardest-hit with COVID-19 illnesses and deaths. As of June 19, close to 7,800 people had died, according to a database maintained by The New York Times. On March 17, Governor Charlie Baker closed the dining areas of all restaurants. Operators could still provide food and beverages for takeout or delivery. When Massachusetts went into lockdown, Carvalho closed 10 of his 20 stores. 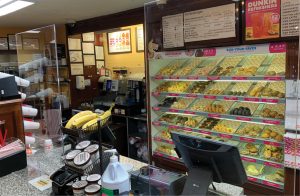 “About half of our stores had to close because they were in locations that were closed. [They were] a mall and a shopping plaza,” Carvalho says. “Harvard Square was a ghost town. We kept only one of our three stores there open.”

Four hundred miles to the south, along Maryland’s Eastern Shore, Todd Lalumiere’s Dunkin’ shops were buzzing. “We were at 94 percent of our 2019 sales this spring,” Lalumiere says, noting the only one of his stores to close was one along a busy pedestrian area around the corner from the Maryland State House. That location on 38 West Street was shuttered for 10 days after Maryland Governor Larry Hogan also issued guidance to shelter in place.

On April 30, six weeks after the national emergency was declared, Dunkin’ reported on its earnings call that 90 percent of its restaurants remained open. Dunkin’s President of the Americas Scott Murphy credited Dunkin’ on-the-go business model for its sustainability. He reported franchisees in more than 1,000 locations had shifted to curbside pickup and had more than doubled their delivery footprint, utilizing services like Grubhub and Postmates.

“We were able to do curbside in a few locations where we had parking lots,” says Carvalho. “And we have done a lot of delivery business. Every store has to do delivery now and we have to use multiple delivery methods. Whatever we can do to gain any sort of market share during this time. I don’t know what tomorrow will bring…” Carvalho says, admitting he never anticipated seeing “anything like this in my lifetime, of this magnitude for this long. You don’t learn how to deal with this in business school; there’s no manual.”

Still, Carvalho recognizes that his network is surviving because his team knows how to get things done and he has a loyal customer base. Without a strong brand and franchisee base behind him, Carvalho says, his future would be at risk. “I’m part of a franchised business so I’m not on an island by myself,” he says, adding his appreciation to Dunkin’ Brands for stepping up to protect franchisees’ interests. “In the fog of war, Dunkin’ was a beacon of light,” he says. 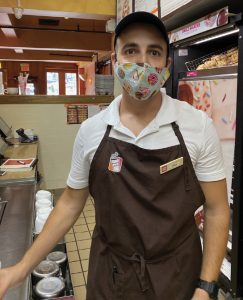 Coronavirus hit Maryland hard as well. According to the Times’s database, Maryland recorded more than 3,000 deaths by June 19, with 817 occurring in Anne Arundel County, home to the State Capitol where Lalumiere has five shops including the one on West St. But the bulk of his stores are situated across the Chesapeake Bay Bridge in Queen Anne’s County, where only 14 deaths had been recorded and restrictions on dining areas were being eased sooner.

“It’s being phased in different steps, so it won’t be a big deal when we go wide open. We’re taking baby steps to reopening,” Lalumiere says. “We’ll open as soon as we can with tables six feet apart. We’ll be on top of the cleaning and will probably dedicate [an employee] to be cleaning the lobby. We’re ready for it and I think people will want to come into the dining room.”

But David Portalatin, author of Eating Patterns in America, and a food industry advisor for the NPD Group told QSR Magazine, “The value of incremental on-premise sales isn’t as important to quick service restaurants. In fact, some have resisted reopening dining rooms preferring to forego the incremental cost of doing so and continue to optimize off-premise sales.”

In its latest edition, Business Insider Magazine examined how fast food restaurants could change forever as a result of the coronavirus. “Drive-thrus that are busier than ever” was among the 13 changes it highlighted.

Lalumiere can already attest to the challenges that come with a busier-than-normal drive-thru business and the stress points he has seen in his shops. He fully anticipates more demand for drive-thru orders in the future and is looking into where he can expand from a “single stream” drive-thru lane to multiple lanes, which he believes would allow his stores to handle an additional 50 percent more vehicle traffic.

Dunkin’ has been piloting in-restaurant dining at several locations utilizing a set of safety standards, which includes enforcing social distancing requirements, requiring employees to wear gloves and masks and keeping condiments behind the counters.

Research by the firm Datassential indicates 7 in 10 customers will be comfortable returning to tables and chairs if they see restaurants adhering to social distancing in their seating plans. 62 percent of survey respondents told Datassential they wanted to see frequent sanitizing of all surfaces. QSR franchisees everywhere are eager to see how customers react to reopened sitting areas. If customers don’t feel safe, operators will have to improve their mitigation procedures.

Despite the eagerness to return to “normal,” uncertainty about COVID-19 remains. But what is certain is the determination among franchisees to be there for their customers and their employees. Carvalho says the ones that survive these challenging times are the ones that pivot and adapt. “We will have to do things differently so we end up stronger. We can have more efficient footprints for our stores, and we can have pick-up windows in our urban locations. Whatever the next paradigm may be,” he says, “we have to adapt to it.”