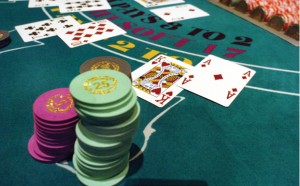 It’s been called Sin City and the Entertainment Capital of the World, but six years ago, many described Las Vegas a different way. “It was nasty and bleak,” says Arvind Menon, president and CEO of Meadows Bank in Las Vegas. According to Menon, when the U.S. economy crashed, Vegas “looked like a battle zone. A lot of businesses closed and there were empty shopping centers.”

Jason Duffy co-owns 54 Dunkin’ Donuts franchises in the United States, with 11 of them in the Vegas market. He also remembers how the downturn hit Las Vegas.

“When we bought the Vegas stores in 2010, it was one of several markets in the country that were hardest hit by the economic downturn,” he says. “There was high unemployment of almost 20 percent and massive foreclosures. There was less consumer spending and the current Dunkin’ stores were also not being run well.”

Throughout the years, Vegas has depended on two industries – gaming and construction.

“When the recession hit, we lost about 170,000 construction jobs,” says Menon. “Today, gaming is doing better and there are more people coming to town compared to prior years, but the average amount they are spending just isn’t what it used to be.”

“For the longest time, downtown was the stepsister to the strip if you will,” says Menon. “All the ritzy new places were opening on the strip, but nothing new was opening in downtown. Downtown was in pretty bad shape, but, now, the mayor is putting a strong emphasis on fixing it.”

Thanks to an improving economy, the vision of Mayor Carolyn Goodman and the passion of local business owners – like Duffy – who saw the community’s potential, Vegas is “all in” when it comes to bouncing back. Today, the city’s Redevelopment Agency is strongly promoting downtown Las Vegas through two designated redevelopment areas and is working with developers, property owners and the community on several revitalization efforts. The effort is helping create jobs and eliminate urban decay.

“We are well into recovery,” says Mayor Goodman. “In the early 2000s, we were in a boom, our population grew unbelievably and then, in 2008, things sort of stopped everywhere. We tightened our belt while we led the state in foreclosures. But, we started climbing back in 2011 and now we are really enjoying the turnaround.”

Goodman points to several new developments off the strip as signs that Vegas is back. “We have a new performing arts center and the Cleveland Clinic Lou Ruvo Center for Brain Health. We have museums, outdoor malls and 36 new stores in the heart of downtown. There’s also the excitement of the Fremont Street Experience.”

As a small business owner opening new Dunkin’ shops during the economic downturn, Jason Duffy needed a plan of action to overcome Las Vegas’s economic struggles. “During that time, our goal was to change the general perception in the market while battling the market conditions.”

Duffy says he examined the issues and started focusing on things they could control, like operations and customer service. “We knew that by doing that, the other things would work themselves out,” says Duffy. “We got our operations team aligned and, within a year, had built their confidence back, and the confidence of the customers. That allowed us to be proactive and get back out to the community. We did this by reaching out to a five-mile radius. As a result, our sales started to show increases every year.”

Even as the Vegas economy was in a nosedive – with construction frozen and unemployment approaching 20 percent – Duffy says he and his partners remained committed to their contract which called for opening nine Dunkin’ Donuts stores.

“What’s the positive of a high unemployment rate? We were able to pull from an employee base that needed work. Now, unemployment is down to eight percent, companies are having conventions again and tourists are going on vacation again. Building permits are also happening again,” Duffy says.

According to Cara Clarke, senior director of communications for the Las Vegas Metro Chamber of Commerce, “Nevada is outpacing many states in job creation. We’re listed as number three by the National Federation of Independent Business for our friendly climate. We have no corporate income tax, estate tax, franchise tax, personal income tax, inventory tax and corporate shares tax and our property tax has been capped.” And, Clarke says. The Las Vegas Valley had nearly 9.7 million visitors in the fourth quarter of 2013.

Recently, two major corporations – Zappos and IKEA – decided to call Vegas home. Zappos, the online shoe retailer, is moving its headquarters and 1800 employees into downtown Las Vegas. IKEA will open its newest furniture store in 2016 on 26 acres in the Spring Valley area. The deciding factor for the company—the Vegas population growth.

“We’ve been looking here on and off for about 10 years; we’ve had our eyes on Las Vegas,” Joseph Roth, director of public affairs for Swedish-influenced IKEA, told the Las Vegas Review-Journal. “The population has been hovering around the two million mark and now it’s big enough to support a store, and we found a perfect site so it’s perfect synergy and here we are.”

Menon, the CEO of Meadows Bank, says any franchisee considering the Vegas area should consider the population growth. “There’s a direct relationship to the population in the area. If you’re in a small town, you have a limited number of people. Clark County has two million residents. That’s a big number. On top of that, add in tourists who visit the city and that’s a tremendous amount of potential customers for Dunkin’ Donuts. It’s the same number that IKEA used to decide to open their store here too. It’s an important number to think about.”

Clarke says that while there is opportunity in the strip and downtown, the development of the Clark County Beltway, which connects three of the region’s largest population centers, is creating new development opportunities away from downtown.

While things are looking up, metro Las Vegas still has obstacles to overcome. “I wish Vegas wasn’t as reliant on tourism and construction as it is,” says Duffy. “Looking out 10 to 20 years, if there was a more concerted push toward, say, biotechnology or other industries.” Diversity, he says, would prevent the kind of volatility that plunged Las Vegas into the depths of the Great Recession.

Leaders recognize that Las Vegas is prone to the ups and downs of the, sometimes fickle, housing and tourism industries. The question, according to Duffy is: “How do you offset that so businesses don’t feel the same effects?”

Even as that question remains, Vegas is making great strides and remains optimistic more business owners will lay down their chips and bet on the local economy.