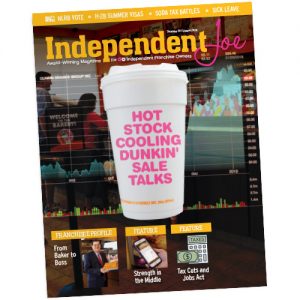 On October 31, 2017, as Dunkin’ Donuts franchise owners were gathered at Foxwoods for the DDIFO National Conference, rumors of a marriage between Dunkin’ and Krispy Kreme spread across the business press and social media.

Experts offered their opinions on CNBC, Bloomberg and Nation’s Restaurant News. Among those discussing a possible purchase by the private restaurant company JAB Holdings – which bought Krispy Kreme in 2016 – was Jeremy Scott, senior research analyst at Mizuho Securities. He wrote, “While this isn’t the first time a deal has been speculated between the two companies, the market reaction appeared to imply more credibility this time around. JAB has been an aggressive acquirer over the past three years, paying substantial premiums for coffee and bakery brands in both retail and restaurants.”

In fact, Michael Halen, senior restaurant analyst at Bloomberg Intelligence, calls JAB “the most logical acquirer” of Dunkin’ Brands, but doesn’t believe a sale is imminent. Two weeks after the Oct. 31 rumor, DNKN stock hit its 52-week high ($59.45); early in January it climbed above $66.00. Many institutional investors have increased their holdings, a move the Stock News Gazette says indicates “institutions are feeling bullish about the stock.” Overall, more than 90 percent of DNKN is held by institutional investors.

One large investor, who spoke with Independent Joe on condition of anonymity and takes a long-term view of Dunkin’ Brands, believes the latest move up in the stock is not related to speculation of being acquired. Instead, he says, it’s almost certainly related to the recent tax reform bill. “Dunkin’ currently pays a full 38 percent tax rate, but under the new law the tax rate will be in the 24-to-27 percent range,” this investor says. “Mathematically this means Dunkin’s earnings per share will increase by around 20 percent. Dunkin’ shares have to increase by that amount just to hold their current P/E multiple.”

The investor also points out that Dunkin’ additionally benefits from the parts of tax reform that help its franchisees, “There are two ancillary benefits to tax reform. First, many of Dunkin’s franchisees are structured as pass through entities and will see tax relief, and thus increased cash flows as well. This helps support future remodels and continued new unit builds. Second, 100 percent Capex deductibility over the next five years is timed perfectly for Dunkin’s push to have franchisees remodel the restaurants.” 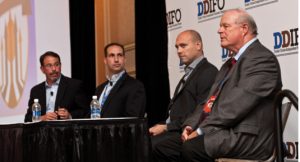 Still, the investor did reiterate that eventually Dunkin’ Brands same store sales figures will need to show renewed growth in order for the stock to continue to appreciate. “There is some controversy over the value of Dunkin’ stock because of the same store sales numbers,” this investor says. “[We] believe a current slowdown in sales is temporary. We think the best time to buy a long-term business is when it is down.” He points out that Starbucks same store sales have decelerated of late as well, suggesting Dunkin’s slowdown may not be company specific.

There are, however, a significant number of hedge funds taking the opposite view. Six percent of DNKN stock is now held in short position, a number experts say is high. For comparison, 2.1 percent of Starbucks is held short. Restaurant Brands, owner of Burger King and Tim Hortons, has 3.5 percent held short and less than 1 percent of McDonald’s is held short.

As Halen points out, investors and analysts typically compare Dunkin’s numbers with other franchised QSRs, like Wendy’s McDonald’s, Dominos and Starbucks, though the company that most resembles Dunkin’, Tim Hortons, can no longer be used to compare multiples since it is no longer a standalone company like Dunkin’. There are other coffee retail brands Halen would love to have available for comparison. But, companies like Peet’s Coffee, Caribou Coffee, and Stumptown Coffee have all been swept up by the privately-held JAB Holdings, which bought Panera Bread last spring.

During the Wall Street panel convened at the DDIFO National Conference at Foxwoods, Halen and First Manhattan Company’s Michael Kelter were asked if Dunkin’ Donuts would be a standalone company in five years; they put the odds at around 50-50. As Kelter pointed out, “A larger company can do a better job with IT and marketing.”

Restaurant Brands is well positioned for a purchase. With sales up slightly at Tim Hortons, the company may be looking for an opportunity to expand its international coffee reach with Dunkin’ flying its flag. 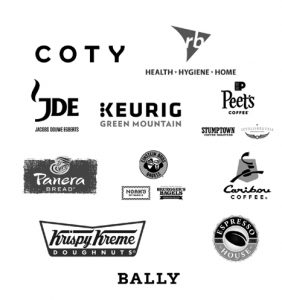 YUM Brands, owner of KFC, Pizza Hut and Taco Bell, has also been mentioned as a possible Dunkin’ buyer. That scenario may not be the most beneficial for Dunkin’ franchisees, according to Halen. “[Franchisees] would have to compete for capital with the other brands and senior management tends to invest in the strongest brands,” which he says could leave Dunkin’ fighting for corporate investment with the strong Taco Bell brand and an improving KFC.

Dunkin’s stock strength may itself be the factor preventing a takeover; it is trading at 16.3 times next year’s Ebitda. By comparison, JAB Holdings paid 16-to-17 times for Peet’s, Krispy Kreme and Panera. A stock value of over $65 dollars per share would likely lead to a buyer’s ask price of $80 or $85. That may just be too steep for a buyer that is looking to pay only $70 per share. Industry watchers believe that is why the JAB Holdings rumor never materialized—and why investors are interested in taking a long view of DNKN. Dunkin’ Brands’ recent moves to simplify its menu, invest in technology and focus on beverage sales show the company is serious about keeping its stock moving higher.

Halen calls Dunkin’ Donuts a “powerhouse brand” with a market capitalization over $5.5 billion, sizeable sales and a large number of shops. He believes once the dust around tax reform settles and analysts can get a clearer view of a restaurant company’s true value, there will be more mergers and acquisitions. And, Dunkin’ Donuts will still be in the crosshairs.