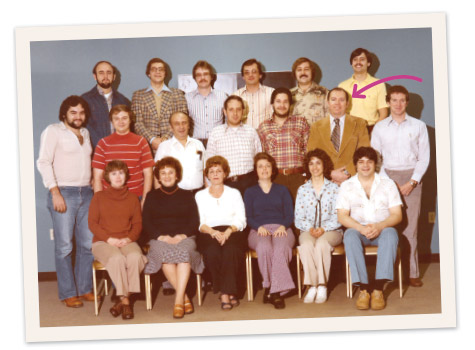 Few of today’s Dunkin’ franchisees can say they’ve been with the brand for 50 years. And only one (that we know of) has logged more than 20 years at both Dunkin’ Brands and as a franchisee. So, when it came time to talk about the evolution of Dunkin’ Donuts, it was an easy decision to just call Bill Daly.

A Massachusetts native and graduate of Boston College, Daly remembers his first day as an employee of the Dunkin’ Donuts Company. It was November 1, 1970, during the middle of Richard Nixon’s first term as President of the United States. Daly was already a restaurant expert of sorts, having worked behind the counter at a Friendly’s restaurant not far from his college dorm. At the time, Friendly’s was known for its square-cut beef burger and thick frozen drink called a Fribble. Friendly’s had counter and table service for breakfast, lunch and dinner, along with a takeout counter for drinks, meals and ice cream. And, while Friendly’s sold coffee, Dunkin’ wanted Daly because of his knowledge of the burger business.

“I remember I interviewed with Ralph Gabellieri, [Midwest Region VP] George Rice and [New England Region VP] Roy Jemmison and they wanted me to go to Chicago and be a district manager for Dunkin’. We were planning to move, when they called and said we want to hire you and keep you in New England. We own this chain of fast food restaurants,” he recalls, referring to Howdy Beef’n’ Burger. At the time, Howdy had more restaurants in New England than McDonald’s, but Dunkin’ founder Bill Rosenberg wanted to sell Howdy. Daly says Gabellieri told him the company realized they “had a tiger by the tail” with the donut and coffee business and that Howdy was a diversion. “Basically, I helped them sell off the stores,” Daly says.

From those early years through his decades as a brand executive and as a franchisee, Daly had a bird’s eye view of the decisions and innovations that changed Dunkin’ from a regional donut brand to a major national beverage company. He remembers the epiphanies that led to new store layouts, the realizations that drove the beverage business, and the discoveries that put new snacks on the menu. He also remembers how people did their jobs in the days before computers and cell phones.

By 1979, Howdy was gone and Daly was a district manager overseeing the Dunkin’ Donuts business along Boston’s South Shore region, which was already well-seeded with Dunkin’ locations. At the time, one of Daly’s biggest challenges was making sure franchisees were complying with brand standards to offer a sufficient variety of donuts. “In those days it was a big deal. A franchisee could be cited for not having enough varieties,” he recalls. And, while donuts were always popular (especially after church on Sundays), Daly and the franchisees in his region began noticing a change in customer behavior. Fewer people were sitting at the counter to eat a donut and linger over a cup of coffee; more people were opting for take-out. It was one of those “Ah, ha!” moments. Counters and stools took up most of the space inside a typical Dunkin’ shop, but sit-down service only accounted for 30 percent of the sales. Daly remembers John Boujoukos, who by this time, had left the corporate offices and was running a Dunkin’ shop in Framingham, Mass., was one of the first to rip out the counter and re-imagine the store layout.

“Franchisees convinced corporate to test getting rid of counters and make a take-out area so people could order their product and leave,” says Daly, recalling that it was a smart business move but a scary proposition because it reflected a change in Dunkin’ culture. When counters went away, so did the ceramic Dunkin’ mug, which Daly recalls represented the image of Dunkin’ Donuts at the time. But, as everyone learned, it was the coffee that would become the heart of the brand.

Daly loved working for Dunkin’, especially managing a territory in the brand’s own backyard. By the early 1980s, New England was developing a love affair with Dunkin’ Donuts coffee. The beloved local brand sprouted even more locations around the region. People made a trip to Dunks a part of their regular routine. Part of Daly’s job was to visit the stores along the South Shore, check their operations and talk with the franchisees. Daly always believed in walking through the front door of a shop, perhaps because so many franchises always walked in through the back of the house and missed the customer’s perspective. It was a technique he employed throughout his career as a corporate manager and a franchisee, so was standing in line to make an order. During those days in the early 80s, he noticed how people really loved Dunkin’ coffee. That notion was reinforced when he told people he met socially that he worked for Dunkin’ Donuts. “They would always comment how much they loved the coffee,” he remembers.

Daly and New England Marketing Director Bernie Kenney talked it over. They decided they should tell the bosses at Dunkin’ that future ads should put more emphasis on selling coffee. But the reception was lukewarm. As Daly recalls, one senior executive quipped, “We are in the donut business.” But, Daly and Kenney wouldn’t be deterred.

Kenney devised an ad for use in newspapers and on local TV stations in the Boston market that sold donuts, to please the bosses, but prominently featured coffee. It worked. More people bought more coffee. When new ads appeared highlighting coffee, sales followed. Eventually, Dunkin’ created a whole new campaign for Fred the Baker in which he proclaimed it was, “Time to make the coffee.” The shift to coffee had gone into overdrive.

“We all realized it was more profitable selling more coffee,” says Daly. “Franchisees realized lower food and labor costs. The economics of the business changed.” Years later, Kenney would partner up with Daly to buy a network of Dunkin’ shops.

Even as the switch flipped on so many more coffee-makers around the system, nobody was giving up on the idea that a snack pairs perfectly with a cup of coffee—especially in the morning. Donuts are just one kind of snack. Once Dunkin’ began including egg sandwiches, bagels and muffins in its menu mix, sales soared. Mornings at Dunkin’ now meant breakfast and many customers who had made McDonald’s golden arches a part of their morning routine pulled into their local pink and orange Dunkin’ Donuts shop instead.

Adding new food to the mix also added new challenges, among them: buying and installing new ovens; changing the workflow behind the counter; training workers to prep food; and procuring new products and recipes. Dunkin’ had donuts down pat, but muffins were something else entirely.

Often viewed as a healthier alternative to donuts because they contain fruit, muffins are generally higher in calories. Blueberry muffins, for example, contain as much sugar as a can of Coke. Dunkin’ didn’t skimp on the sugar, even opting to include a sprinkle of sugar crystals along the muffin’s crown. The reason for the added sugar on top may have something to do with the muffin Dunkin’ used as the model for its own. It had been developed by another famed New England retailer.

Jordan Marsh was considered the world’s first modern department store. The company’s flagship, located in Boston’s Downtown Crossing, was renowned for its selection of ladies and men’s clothing, for its Enchanted Village holiday display, and for its bakery. “On Fridays, people would stand in line for 20 minutes to buy blueberry muffins to bring home for the weekend,” recalls Paul Senecal, who was Vice President and General Manager of the downtown Jordan Marsh store during those years. The muffins were famous and earned a reputation, along with the baked bean, as something uniquely Boston. “Everyone tried to steal our recipe,” Senecal says. “It was one of the most guarded secrets of the time.”

As Daly recalls, Boujoukos went to Jordan Marsh to buy their famous muffins and bring them to the Dunkin’ Donuts food lab. “We tried to match the recipe the best we could in the lab,” and from there the Dunkin’ muffin was born, he says. The first market tests for blueberry muffins was in Daly’s district and they sold well. “It was very successful, even though we had to make them from scratch.”

Over the years, Dunkin’ became one of the nation’s largest purveyors of blueberries, but unlike the Jordan Marsh muffin, which used plump blueberries from farms across the U.S., Dunkin’ preferred the smaller wild blueberry grown in Maine and Canada. Topped with a sprinkle of sugar and served warm or room temperature, the Dunkin’ Donuts blueberry muffin remains a top seller.

For Bill Daly, having had a front-row seat for Dunkin’ Donuts’ emergence as a top-tier, quick service food and beverage brand, has been a lifetime achievement. During the early years, when Bill Rosenberg ran the business, through the end of the 20th century and to current day, Daly has been there, spotting the trends and capitalizing on the brand’s quality and reputation. He is proud of his 50 years with Dunkin’ and its close-knit community of franchisees to which he became an integral member.