By AdministratorPublished May 20, 2009Category Legislative Updates 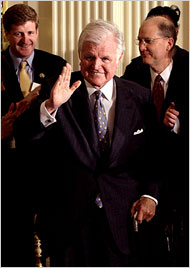 A long-stalled effort to guarantee American workers paid sick days takes a big step forward Monday with the introduction of legislation by Congressional Democrats.
The proposal went nowhere during the presidency of George W. Bush, but as a senator and then a presidential candidate, Barack Obama backed it, and Michelle Obama embraced the idea last week in a talk to business leaders.

Now women’s groups, labor unions and other supporters are voicing optimism about its prospects.

“The last eight years, you kept clawing and scratching and didn’t get anywhere, but we have a real opportunity now,” said Representative Rosa DeLauro of Connecticut, who along with Senator Edward M. Kennedy of Massachusetts will introduce the measure. “There’s something wrong when people have to choose between their jobs and taking care of themselves or their families when someone is sick.”

Business groups are vowing to block the legislation, arguing that the recession makes this an inopportune time to create a new mandate that they say would raise costs for employers.

“Given that small businesses are barely able to keep their heads above water in this economy, we don’t think this is the right legislation to be pushing right now,” said Susan Eckerly, senior vice president at the National Federation of Independent Business, which represents small-business owners.

Supporters, on the other hand, say the legislation is especially timely now, given the swine flu epidemic.

The bill, the Healthy Families Act, would be binding on employers that had 15 or more workers. It would guarantee employees one paid hour off for each 30 hours worked, enabling them to earn up to seven paid sick days a year. They would be entitled to claim their days when they or a child, a parent, a spouse or someone else close to them became ill.

Some lawmakers see the bill as complementing their goal of universal health coverage, a longtime objective of Mr. Kennedy. “Everyone is at risk,” he said in a statement, “when the people who serve our food, clean our offices and care for our elderly can’t take time off and get well.”

The legislation’s preamble notes that nearly half of private-sector workers and three-fourths of low-wage workers do not receive paid sick days. Far too often, advocates say, such employees feel compelled to go to work even when ill, because they fear being fired or at the least losing the day’s pay.

Ms. DeLauro recalled that at a meeting with wives of men serving in Iraq, one of them complained that her employer had threatened to fire her because she took two days off when her child was ill.

“Her husband is fighting in Iraq,” Ms. DeLauro said, “but she may lose her job because there aren’t two parents home to deal with the problem of sick kids.”

In a move timed to coincide with the legislation’s introduction, the liberal Center for Economic Policy and Research plans to issue a report on Monday, “Contagion Nation,” which finds that the United States is the only industrial nation where workers are guaranteed paid sick leave for neither short-term nor long-term illness.

San Francisco and the District of Columbia already have laws guaranteeing paid sick days, and voters in Milwaukee overwhelmingly approved such a guarantee last November, although business groups have obtained an injunction that has kept it from taking effect. In addition, the legislatures of a dozen or so states, including Connecticut and Massachusetts, are debating similar measures.

Read and take action: Tell Your Representative and Senators to Oppose the Healthy Families Act!