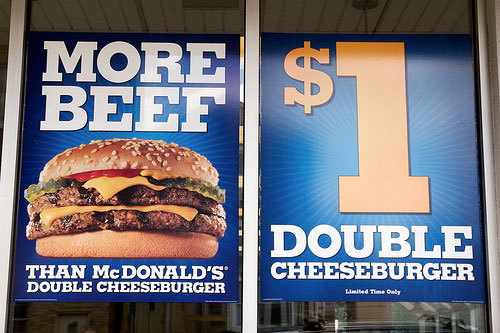 Ron Ruggless of Nation’s Restaurant News reports that after encountering fierce pushback from franchisees over its $1 double cheeseburger promotion, Burger King said it would raise the item’s price and introduce a new value sandwich in its place.

Beginning in late April, Burger King said it will offer a BK Dollar Double, which has two flame-broiled burger patties but only one slice of cheese. The original quarter-pound double cheeseburger will go up in price to $1.19.

The strategy is similar to one McDonald’s employed in 2008, raising the price of its double cheeseburger to $1.19 and introducing a $1 McDouble, which contains two burger patties and one slice of cheese.

“We are excited to offer two great-tasting sandwiches to our guests at prices they appreciate,” a Burger King spokeswoman said Wednesday. “BK continues to test innovative new products that will appeal to both value conscious consumers and those seeking premium indulgent products at affordable prices.”

In a memo to franchisees, which was obtained and reported on Wednesday by the Miami Herald, Burger King officials said the BK Dollar Double and higher-priced double cheeseburger are part of the chain’s new value strategy.

“Guests continue to count their pennies, and the fight for traffic and sales is more competitive than ever,” Chuck Fallon, Burger King’s North America president, and Mike Kappitt, senior vice president of global business intelligence, wrote in the memo.

The company said that on April 20 the price of the controversial double cheeseburger could go up to $1.19. Some restaurants could seek exemptions to price the burger at $1.29 if competitors were selling a similar product at higher prices, according to the memo.

When the $1 double cheeseburger was launched last October, franchisees said they were losing more than a dime per sandwich sold. Some of them sued the company, alleging that it did not have the right to mandate maximum prices.

Franchisees had yet to comment officially on the new menu strategy.

In another menu change, Burger King said Tuesday it would begin offering Seattle’s Best Coffee, which is owned by Starbucks, in its US. stores beginning in September. The new premium coffee will replace the current BK Joe.