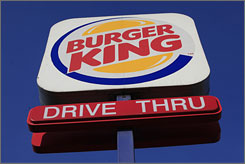 Ashley M. Heher of the  Associated Press reports at USA Today that Burger King(BKC) plans to launch a massive new coffee line as it tries to overhaul its breakfast menu and boost its slumping business. The nation’s No. 2 burger chain will add Starbucks’ Seattle’s Best Coffee to all its U.S. restaurants in a phased roll-out that begins this summer, executives told The Associated Press on Tuesday.

The move takes a page from rival McDonald’s success with its McCafe line of coffee drinks, which have been credited with boosting its performance. The deal also adds a new wrinkle to the coffee wars, because McDonald’s coffee campaign has been seen as taking aim at Starbucks.

Under the effort, more than 7,000 Burger King restaurants will begin to sell the coffee along with iced varieties that also come with a choice of plain, vanilla or mocha flavors and whipped toppings. While prices will be set by franchise owners — who operate 90% of the chain’s locations — the brew’s suggested prices range from $1 to $2.79. Drinks will be sold all day.

Terms of the agreement weren’t disclosed. But the deal marks the latest expansion for Seattle’s Best and comes as Starbucks focuses on building the lesser-known brand it acquired in 2003. In the fall, Starbucks signed a deal with Subway locations to sell the roasted coffee in 9,000 locations — more than doubling the number of U.S. sites where the brand is sold.

Most fast-food restaurants, which spent recent years expand their early morning business, have seen a decline in breakfast diners as unemployment climbs and fewer workers stop in on their way to work. In 2009, total visits to fast-food locations across the country slipped 3%, while traffic during breakfast hours slipped 2%, according to research from The NPD Group.

But selling a good-tasting cup of coffee, which often comes with a fat profit margin, is generally considered a key part of any successful breakfast effort — in good times and bad.

Five years ago, Burger King launched its BK Joe coffee brand, which will be retired as Seattle’s Best takes over.

Tuesday’s announcement marks the beginning of the first sizable change to Burger King’s breakfast lineup, which was last revamped in 2007 when the restaurant chain, based in Miami, launched its breakfast value menu.

“You should expect to see new and improved products from Burger King at breakfast,” Schaufelberger said.

“To me it’s just a way to offset the weakness in the breakfast business,” Hottovy said. “It’s something most (fast food) restaurants recognize could be a sales driver, and helps the bottom line.”

Burger King is also rolling out a change to its value menu that will remove a slice of cheese from its double cheeseburger and rename it the BK Dollar Double. The existing double cheeseburger, which has two slices of cheese and which the chain has been selling for $1, will now cost $1.19.

The move mirrors what McDonald’s did with its McDouble, which also has one slice of cheese and replaced the double cheeseburger on its value menu.

Burger King franchisees have complained that they’re losing money on the dollar double cheeseburger. They sued the company after it rolled out the promotion after they twice voted it down.