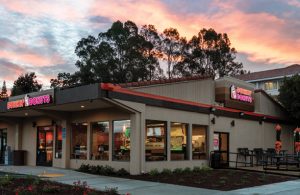 “The first day we opened, we had a line that went down the street and around the corner. People waited for two hours to get to the counter,” says Matt Cobo, who signed a development deal with Dunkin’ Brands to open 12 restaurants over the next eight years in Contra Costa County.

We spoke to him on Day 19 of his opening and he told us he had just had his busiest day yet, selling more than 800 dozen donuts. Cobo says he was surprised by the attention his shop had generated so far. And, while he is new to Dunkin’ Donuts, Cobo knows a lot about running a restaurant franchise. He spent the last ten years owning Panera Bread locations in California’s wine country, as well as in downtown San Francisco—just across from the city’s baseball stadium, AT&T Park. His new brand may be less familiar, but the community where he opened is anything but. Cobo was born in Walnut Creek, in a hospital across the street from his new Dunkin’ Donuts shop. 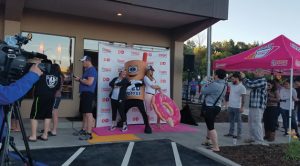 “The doctor who delivered me came to the counter the other day. He’s known me as long as my mom has,” Cobo jokes.

As he is learning, owning the Bay Area’s first Dunkin’ Donuts location has specific challenges, but, perhaps none more important than managing the sales mix. So far in his short tenure as a Dunkin’ owner, 76 percent of sales have been in donuts.

“How do we move the mix? It starts with customer education. How do you teach customers we are a coffee shop?” One way, Cobo says, is to get people thinking about their beverage right away.

“It’s really a grassroots education to teach our customers who we really are, a coffee shop. We start the counter relationship with, ‘Welcome to Dunkin’. Can I get a drink started for you as you pick out your donuts?’” he says.

Once viewed as a sleepy suburb, Walnut Creek has emerged as an outpost of cool in San Francisco’s metro area. It is a transit hub which connects key highways and is home to a Bay Area Regional Transport (BART) light rail station. It’s known for its open spaces, good schools and culture. Shopping and dining is available in the city’s newly renovated, historic downtown.

“Our area is close to but not part of Silicon Valley, so as a community we are fairly well-to-do, but living here is more affordable than other parts of the Bay Area. We have experienced a revitalization of our downtown area as our traditional retailers have reinvested in their facilities. New apartment and condo buildings have been developed to meet the needs of younger people and those looking to downsize,” says Walnut Creek Mayor Loella Haskew.

Its population of 67,000 includes many people with East Coast and Chicago connections, according to Mayor Haskew, herself a New York native.

“Dunkin’ Donuts is a part of their growing-up culture too. So now that Matt has opened this store, they can have a touch of home without having to travel further than downtown Walnut Creek.”

“Dunkin’ Donuts is far more approachable and down to earth making it easier to enjoy a snack and a beverage.”

According to recent labor statistics, less than six percent of Walnut Creek’s population is between 18 and 24, the prime age for part-time counter help. Cobo says he was concerned about the pool of labor, especially after he received only eight job applications in the first week he began advertising for open positions. On opening day, he had 48 people on his payroll, but it wasn’t enough.

Like most new franchisees, Cobo has his own stories about working from 4:00 in the morning until 10:00 at night. He calls it, “part of the deal,” and doesn’t mind putting in the time.

“It’s a round-the-clock proposition at the beginning. Being part of it fuels me. I have no complaints.” Cobo credits his wife as being super supportive. The couple has two children: a six-month-old and a two year-old toddler.

One thing Cobo learned through his Panera franchises is that labor is a huge expense in California.

“At my downtown Panera, we had to pay San Francisco’s minimum wage of $12.25 per hour. I recognize there is a challenge with the cost of labor in this state,” he says.

California’s minimum wage will rise to $15.00 per hour in 2022, a fact that Cobo has already taken into his accounting.

“I think it further underscores how you have to be sound operationally,” he says. “There is no overtime in my organization. We schedule people carefully; it takes a lot of time. You have to be prepared on a daily basis. It’s challenging.”

One way Cobo has saved on labor costs – and bought himself extra time to hire new employees – has been accepting the generous assistance of other Northern California franchisees. Cobo says OJ Alva, who is opening the Half Moon Bay Dunkin’ location and Nick Disha, who is opening the Marin and Napa County market in the next few months, have offered invaluable (and free) assistance. It’s indicative, he says, of how all area franchisees are working together to make sure Dunkin’ Donuts is successful in its return to the state.

“Other franchisees are telling me they are learning as much as we are right now. Everyone is new and we are all figuring it out.” Cobo says the learning curve is way beyond what he expected, perhaps because Dunkin’ Donuts is run so differently from Panera.

Cobo is quick to point out that Dunkin’ Brands has provided tremendous support for the new franchisees in Northern California. He also has nothing but praise for the franchisee-owned cooperative supply chain, National DCP. “The service is great,” he says.

It is 735 miles from Walnut Creek to closest NDCP distribution center in Phoenix. The trip can take 12 hours each way, and counts for two transit days. According to Scott Carter, NDCP chief, trucks carrying Dunkin’ Donuts coffee, cups and other supplies drive long distances to serve Dunkin’s growing footprint. The furthest distance is 1,000 miles from the distribution center outside of Chicago to Denver. Next furthest is 900 miles from Orlando to restaurants in Houston. Distance demands new franchisees like Cobo plan their orders accordingly. On Sunday, Cobo places his order for Tuesday’s delivery.

“We have to get better at placing orders,” he says. “Given the volume, it’s been hard for us to accurately predict what we will need. Once we get stabilized and see patterns, we will be able to work within the timeframe.”

What happens if they run out of something? Not long after he opened the shop, Cobo drove to the closest Dunkin’ shop in Tracy, Calif. – some 50 miles away – to borrow a tub of glaze, because he had donuts in need of finishing and his NDCP delivery was still two days away.

The state of competition

Operational considerations aside, Cobo has the challenge of starting up his business in the face of established chains like Starbucks and Peet’s Coffee, as well as local, specialty-coffee retailers like Rooted Coffee and Pacific Bay Coffee Co. & Micro-roastery.

Cobo isn’t too concerned about specialty retailers and mom and pop shops.

“There is room for them, there is a market for them and I love them too,” but he points out Dunkin’ is more competitive on price. “How many people can have a $6.00 coffee every day? We want to be the option for the plumbers and soccer moms. We are the everyman’s cup of coffee,” he says.

That’s one of the reasons Cobo’s Dunkin’ Donuts restaurant gives a 50 cent discount on coffee purchases to any police officer or firefighter. He says it’s his way to simply say, “Thank you for your service.”

Dunkin’ franchisees understand what makes each of the communities they serve special and unique. For Cobo, knowledge of the market is second nature. In fact, he’s looking forward to saying hello to many long-time residents he knew growing up in Walnut Creek, and to the many more he will get to know as the owner of Walnut Creek’s Dunkin’ shops.