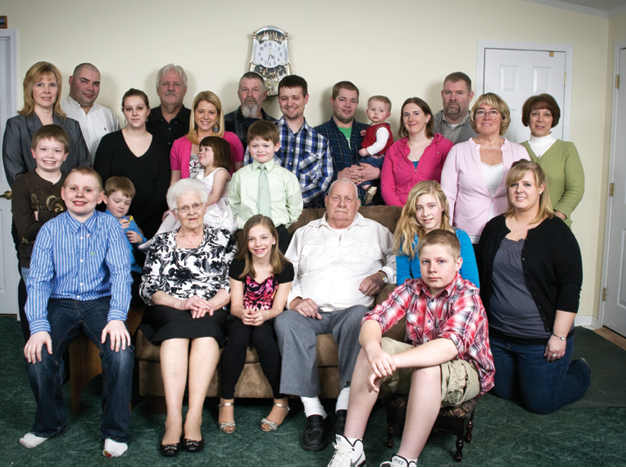 For many American families living in the northeast, Dunkin’ Donuts has been a part of their daily routines for decades. Whether it’s starting the day off with a trip through the drive thru or picking up a dozen donuts on the way to a social gathering or on the way home from church, that iconic pink and orange logo is deeply etched into the psyches of millions. But for one family from Maine, Dunkin’ has played a much larger role in their lives for over half a century.

When Bob MacDonald first took a job as a baker in 1965 at the original Bangor Dunkin’ Donuts location, he probably never envisioned that he would be blazing a career path for his family that would span three generations. But he soon progressed from baking to managing, and in 1973 purchased his first franchise from his boss. And a family business was born.

“Dunkin was what we grew up with, so we never knew anything different,” says his son Bruce MacDonald, whose family now owns and operates seven franchises. “My parents had five kids when they bought the store. My brother was 15 and I was 14, so we went right to work, sweeping, mopping floors, and cleaning. 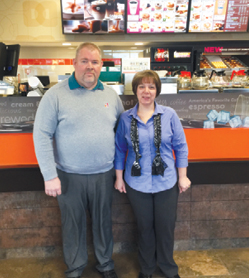 Bruce MacDonald and his wife Kathy

Bruce’s mother Doris also got into the act right from the start, doing everything from counter work to running the office (but no baking).

“He couldn’t afford to pay other people, so he told us, ‘You’re coming to work with me.’ And we just stuck with it. So in my lifetime, it has always been Dunkin’ Donuts,” MacDonald remembers.

In 1974, having been bitten by the franchise bug, Dad bought a second location in Presque Isle—a two-and-a-half hour drive (160 miles) north from Bangor. In 1978, he looked south and bought a franchise in Brunswick—90 minutes and 110 miles away

“This was during the early days of Dunkin’, before you would ever think of putting two or three stores in one small area,” explains MacDonald. “The State of Maine didn’t have a lot of Dunkin’s in the 1970’s, so if you wanted to open another one, you had to [space them out]. Now there’s one on every corner. Three of my five stores are within a 10 minute drive of Bangor and the other two are 45 minutes to an hour away. And there are two other franchise groups in Bangor, so there might be 15 stores in the Bangor area.”

Dad eventually sold those distant franchises to the respective store managers, which allowed him to turn his expansion focus to locations closer to home. He built a store from the ground up in the neighboring (and aptly named) City of Brewer in 1982, then followed suit with additional nearby locations in Bucksport (a 20 minute drive), Holden (10 minutes) and Belfast (45-50 minutes). In the meantime, the boys had worked their way up the ladder, becoming bakers, then store managers. Bruce’s older brother Mark began managing the Bangor and Holden stores, and after completing the six weeks of intensive training at Dunkin’ Donuts University (DDU). Bruce took the keys to the new Brewer store in 1982, which he managed until his father and mother retired in 1995.

“I was 21-22 years old and it was a learning experience to go from baking to running the complete operations of the store,” he recalled. “I had an idea of what it meant [to be a manager of a store], but what you think it means versus what it really means is a completely different story.” 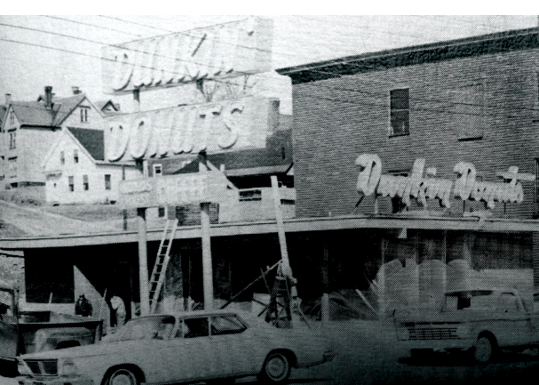 Bob MacDonald’s Dunkin’ career started as a baker at the original Bangor, Maine store in 1965.

While all five of the MacDonald children have been involved in the family business, Bruce is the only one who has remained involved from the start. “Some of my other family members worked through school but left and found different careers. And my brother Craig was a franchisee with us for a while, but it just wasn’t his thing. He sold it off in 2008 and has since passed away.”

Brother Scott also worked in the business until 1994, while his sister Lynn worked at the stores until she completed college. Now she’s back managing human resources for the seven store network. MacDonald’s wife Kathy – who has worked for the family business since 1980 – still manages the office.

The family involvement continues into the third generation as well. Mark has two daughters that worked at Dunkin’s through high school and college; Lynn has a daughter in college and a son in high school, both of whom are now working at the stores, in addition to Craig’s high school age son. MacDonald’s grown sons Robert and Joe are co-General Managers of the entire operation.

But it almost didn’t turn out that way. In the mid-2000’s, MacDonald sold a couple of the shops, “I was going to downsize and go to one store, but then my kids got out of school and decided that they wanted to work in the business.”

So he went back into rebuild mode, developing a second Brewer location in 2005, and then locations in Orrington and Eddington in 2007. In 2012 he opened a store in Milo, and three years ago opened the Blue Hill store, which was built specifically for MacDonald by local supermarket and convenience store owner Chuck Lawrence, who envisioned Dunkin’ Donuts as the anchor tenant for the new plaza situated across from his Tradewinds Market grocery store.

“I have set up three locations with the Tradewinds owner over nine years,” says MacDonald. “One is in a convenience store, one is in a grocery store and the third is this endcap in a strip mall, where the owner built the building from the ground up to accommodate my franchise. He told us ‘We’ll build the building and you’ll be our major tenant.’”

The MacDonald network now consists of a mix of standalone buildings, endcaps, and kiosks within C-stores—a handful of which are located in towns with populations of roughly 2,500. One of his most successful franchises began as a kiosk in a variety store.

“The Holden store was a convenience store with no drive thru, and the owner ended up tearing it down almost five years ago and building a humongous grocery store,” says MacDonald. “So we got a full-blown Dunkin’ in there with a seating area and a drive-thru, and sales have gone up 120 percent since then. It was built on the same lot, right behind it, so we were only down for about two weeks.” 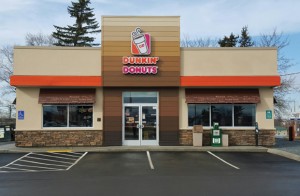 That store also achieved LEED-certification from the U.S. Green Building Council. It was one of the first environmentally friendly restaurants in the Dunkin’ chain and came online before Dunkin’ Brands introduced its DD Green certification program in 2014. Late last year, MacDonald remodeled the original Brewer store (one of two standalones in the city) that his father had built in 1982 and earned DD Green Elite status.

“I just believe it was the right thing to do, and there is a long term payoff that will hopefully work out for us,” MacDonald explains. They instituted a program that recycles 65 percent of the store’s waste and installed energy-efficient LED light fixtures, mechanical units and water-saving plumbing fixtures, as well as an electric car charging station. Taking it one step further, MacDonald now provides financial incentives to employees who ride their bikes to work. 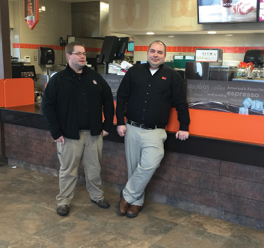 MacDonald also began to recycle the coffee grinds at his stores. “There are people who want it for compost, but I’ve invested in a machine that converts coffee grinds into home heating pellets, which we’re testing in my home. You can heat your house with coffee pellets and, combined with what we’re doing with the compost, we think it will be a big win for us.”

MacDonald’s pioneering spirit was passed down from his father, who was instrumental in the formation of the DCP, Dunkin’ Donuts’ supply chain cooperative. Bob MacDonald was also an original member of the DDIFO board of directors, which formed in 1989. Bruce now serves on the ad committee for the State of Maine and was also one of the driving forces behind the leasing of a 15,000 square foot commercial kitchen in 2000 that serves the baking needs of a seven member co-op of owners within a three-hour radius.

“My father was a big influence, because he went from having nothing – he didn’t graduate from high school – to a good life. He worked very hard and he taught us to do the same. As franchisees, we’re all trying to make money, but I don’t want the money to drive me. If I do the stuff that does drive me, I’ll make money, and I’m happy with that.”