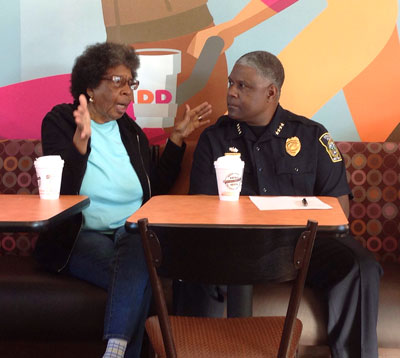 There is that joke about cops and donut shops that every police officer and every donut shop owner has heard. But, the humorous connotation about cops stopping in for a beverage and snack never stuck with New York franchisee Roy Clark. A partner in the Wolak Group of Dunkin’ Donuts restaurants in Central New York, New Hampshire and Maine, Clark was intrigued when his partner, Ed Wolak, heard about a Syracuse-area business that hosted a successful “Coffee with a Cop” event for local residents. That was five years ago.

Coffee with a Cop is a national initiative supported by The United States Department of Justice, Office of Community Oriented Policing Services. Its mission is to bring police officers together with community members to enhance community policing efforts and eliminate communication breakdowns that can lead to distrust.

Clark and his team decided if they were going to get involved in bringing police and community members together in their shops, they would go directly to the top. He wasn’t interested in a small event. “That’s not how we do things around here,” says Clark.

So, he got in touch with the Syracuse police department and offered to host a community event with Chief of Police Frank L. Fowler called “Coffee with the Chief.”

Fowler signed on and, starting last September, the Wolak Group held the first event for Syracuse residents to get up close and personal with the city’s top cop. The meetings have been well received by the police and the community. Each get-together – at different Dunkin’ shop locations around Syracuse – lasted about three hours, during which time Fowler sat with every resident who showed up, sipping coffee and fielding scores of questions. 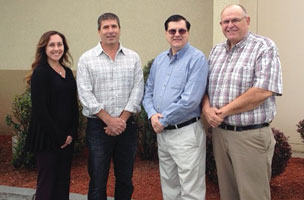 “People who come out are tuned in to what’s happening in their community,” he says. “They want to ask questions about what’s affecting them.

“They talked about crime and safety and were also very complimentary of the job we are doing,” says Chief Fowler. “Many wanted to share the interactions they had with the Syracuse police department. Of course, there were also some complaints about speeding cars or the extra-long police response time.”

The events were a huge success for the police and the community “They were lined up to get in and talk to him,” says Clark, who always believed providing residents with access to the chief in a neutral, laid-back setting would prove popular. Plus, because Clark’s restaurants have been renovated with larger (and more comfortable) seating areas, it’s been easier to accommodate larger groups for public meetings.

But, even as planning for the first event was underway, some questioned the wisdom of holding such a meeting. At that time, the nation’s attention was focused on Ferguson, Missouri where a white police officer shot and killed an unarmed African American teenager named Michael Brown. The incident fanned unrest in the community of Ferguson, leading to riots and, ultimately, the resignation of the town’s police chief. Clark recalls how that incident was altering the view people had of their local police.

“At the time, this put police in a negative light,” but Clark and Chief Fowler decided to keep their event as scheduled. It turned out to be the right decision. Approximately 40 residents came to the first Coffee with the Chief, eager to get to know their chief and discuss issues that were important to their community, not the circumstances swirling around Ferguson.

“Looking back, I was absolutely glad we moved in that direction and really appreciate what we did and how we want to do more,” said Fowler. 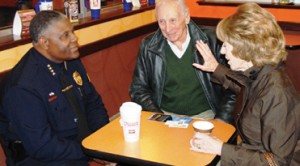 Fowler says he enjoyed the chance to sit and talk with concerned residents, but he also realized that one meeting would not allow him to connect with a large enough segment of the population. So Clark and the Chief coordinated the additional coffee meetings, opening the doors for other community members to join in. In one of a series of articles published in the Syracuse Post Standard, Chief Fowler characterized the meetings this way, “Just an opportunity to ask questions, voice concerns and build a relationship that will strengthen the entire Syracuse community.”

Fowler knows the community. He joined the Syracuse Police Department in 1989 and became chief in 2009. He also knows that Dunkin’ is a strong community partner.

“I’ve enjoyed a long, great working relationship with Dunkin’ Donuts beyond my days as the Chief of Police,” he says. “I was also manager of our department’s community relations department and Dunkin’ Donuts came through and sponsored our DARE program, a program that wasn’t supported by government funding.”

Thanks to positive community reaction – and stories in the media – word of Chief Fowler’s coffee meetings began to spread. In the City of Ithaca, about 55 miles south of Syracuse, Chief of Police John Barber decided that he wanted to initiate coffee meetings with his community. As it turned out, the Wolak Group also operates three Dunkin’ shops in Ithaca, which made coordinating the meetings easy—except for one thing.

“The mayor is ultimately my boss and responsible for the budget of the police department and it’s good to hear of the needs of the members of the community,” says Barber. “The Mayor and I together can really affect change related to policing and the quality of life in the city, so why not have us all on the same page?”

Ithaca’s first Coffee with the Chief (and Mayor) took place this past March. “I heard it all, from the dredging of the local Cayuga Inlet to drug activity in certain neighborhoods,” says Barber. “Some people just stopped in to say thank you, you’re doing a great job and that’s always nice to hear too.”

The local media jumped on the story as well. In an interview with the Ithaca Journal, Mayor Myrick said, “I hope that we will get good ideas from the people, the chief and I will get good ideas about what we can be doing better, and I hope people will better understand what the police department does for them.”

Chief Barber says that this partnership with Dunkin’ Donuts has opened doors to other local business partnerships and the creation of other events. “Other businesses want us to do events with them now,” he says.

For Clark and his partners at the Wolak Group, Coffee with the Chief has been a win-win. It’s strengthened the relationship Dunkin’ Donuts has with its community leaders and with its customers.

“The publicity has been good and it has created good will in the community,” says Clark.

The Wolak Group is already well established as a philanthropic neighbor in New York, New Hampshire and Maine. Earlier this year, the company donated more than $24,000 to Upstate Golisano Children’s Hospital in Syracuse. It also supports Make-a-Wish, the YMCA and the Maine State Society for the Protection of Animals, among others. And, as the company has grown (it now has over 85 Dunkin’ Donuts locations), so has its commitment to community. Clark says the next city to host Coffee with the Chief events is Watertown, NY, about 70 miles north of Syracuse.

As far as the old joke goes, Fowler says he’s heard it all before, including from some residents at his recent Coffee with the Chief meetings.

“You will expect that the jokes about cops and donuts will
come, but the kudos and accolades, pats on the back and thumbs up were great,” he says. “It’s a great idea to come out to the public on the ground level and get that kind of dialogue with the residents. Hurray for Dunkin’ Donuts to think of something like that.”