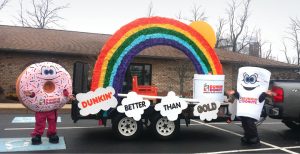 Bryan Stolte started working in restaurants when he was 16, first as a busboy for his sister’s restaurant, and later as director of operations for Dunkin’ Brands, before becoming owner of his own restaurants. He is quick to tell you that good relationships are key to having a successful business. Today, as head of two franchise groups (Spice Mill and BK Coffee), which operate a dozen Dunkin’ Donuts locations and a central kitchen near Youngstown, Ohio, Stolte is drawing on his decades of experience learning, doing and talking to people.

“There’s no magic wand you can throw at these things,” he says. “You have to do it every day: training the right people. If you recruit the right people, they will take care of your guests. The number one priority in the store is to give your customers a Wow! experience.”

Delivering that experience is the highlight of being a franchise owner, Stolte says.

“Ultimately, you are accountable to it. You are responsible for 300 employees and making sure that the entire business runs properly. It’s all you. You can make it as big or small as you want.” 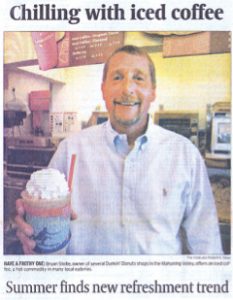 The road to franchising

Stolte spent part of his childhood in Rome, Italy where his father worked as the president of the U.S. Feed and Grains Council. The family then settled in Fairfax, Virginia where Stolte attended high school and got an afterschool job busing tables at a restaurant called Fritzbee’s, which his older sister Brenda managed. That led to a job bartending, then managing a night club—all while he was keeping up his studies at North Carolina State University. After graduating with a degree in business administration and agriculture economics in 1983, Stolte chose a future in restaurant management, because “when I got out, it’s what I knew.”

Four years later, he was working as an assistant general manager at a Connecticut restaurant called Harbor Park, situated along the Connecticut River in Middletown when his life took a new turn. He met a young woman named Karen Dinunzio. The two eventually married at Harbor Park. They had their first son, Bryan James in 1989.

Then Stolte moved his family to Maryland, so he could take a position as a food and beverage manager for the Marriott Hotel Corporation in Baltimore. That’s where their son Jake was born.

In the 1990s, Stolte became director of operations at Fuddruckers, and, later, created a novel concept for a bookstore chain in Alabama, called Books-A-Million: a coffee brand that blends with books. “I was recruited specifically to come up with the idea of a bookstore café,” he says. 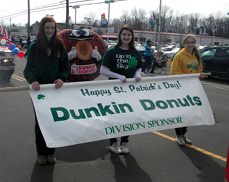 That work, plus a stint at Seattle’s Best Coffee, gave him a strong familiarity with the coffee business and the necessary experience to peak the interest of his former Fuddrucker’s colleague Mike Mace, who had moved to Allied Domecq, then Dunkin’s parent company. Mace first hired Stolte as a consultant, but the job grew to become a director of operations for up to 400 Dunkin’ Donuts stores in Pennsylvania, Ohio, Michigan, and Illinois, West Virginia, Tennessee, and Kentucky. “We had control of everything, and it was a great learning experience for me,” he says. “I was involved in development, deciding the territories the franchisees would get, construction, and opening. We had our hands in everything.”

“One of the benefits of working with corporate was that you get well-rounded in all areas,” Stolte says. “You know pretty much everything, from picking the site, to developing and building a store, how to develop a market, construction, development, equipment—all of that.”

After several years on the corporate side of Dunkin’, Stolte decided he wanted a job that required less travel, “because my kids were growing up and I was missing sporting events and living on the road,” he says. 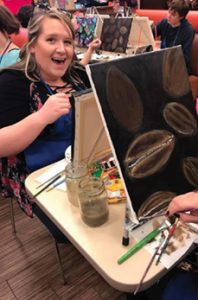 He found the perfect opportunity in Youngstown, where he met Ted Rogers, an existing Dunkin’ franchisee who owned two shops. The pair got a development deal to open seven more Dunkin’ Donuts restaurants, plus a central manufacturing location.

Stolte took the role of Operations Director; son Bryan, Jr. worked the counter and son Jake signed on to help run the central kitchen. After Rogers retired in 2012, Stolte assumed greater control of the business and the future looked bright. But, then tragedy struck. Jake Stolte died at the young age of 21.

“When my youngest son passed away [in 2014], it was too much for me to handle,” Stolte recalls. That was when he reached out to an old friend from Canton – Caleb Watters, who worked for Dunkin’ Donuts corporate – and asked him to join the BK Coffee team.

Today, Watters is the Director of Operations overseeing the 11-store network. Bryan, who is now 28, is a district manager for the company. Karen also helps out in the office.

Having spent most of his life in restaurants, Stolte knows well that finding great people is the most important component to running successful franchises. It’s also one of the toughest. “There is not a dense population here, so there is a limited pool to pull from,” Stolte says. “Running a fast food restaurant is very stressful and time-consuming, and everyone is out there looking for that perfect person. It’s limited, from a service and operations standpoint.”

That means once they find a good, new employee, they focus on training that person to be the best employee they can be.

“When you recruit and train people, and get them to focus on the guests, it helps you drive top-line sales and profit,” Stolte says. “If you wow the guests, [they will] come back, repeatedly, so they’ll become loyal to you.”

Stolte views his workforce on a bell curve, where the top 10 percent of employees are standouts, then the next 80 percent get the job done. The bottom ten percent, “you have to consistently work on, it has to be a focus all the time,” he says. “Training and development is so, so critical and makes a good environment for the staff and team. If you hold the team accountable, and have them involved in all aspects of the business, the profit and loss statements, they learn how to manage the business. How can you run a business and control labor, costs of goods, and expenses if your employees don’t know how to do it themselves?” And Stolte points out that is true for crew members, supervisors and managers.

Of course, managing a staff large enough to operate 11 restaurants is a challenge all its own. BK Coffee has roughly 300 employees. Now that Dunkin’ Brands is instituting a simpler menu and putting a greater focus on beverages, Stolte believes his operations will run even more smoothly.

“Hopefully it will make it easier to train and simpler for the employees, and will make things faster for the drive-thru market,” which represents 70 percent of Stolte’s business. In addition to Dunkin’s menu changes, he also applauds the brand’s decision to eliminate the use of artificial coloring. “It’s what the guests want,” he says.

If you visit one of Stolte’s stores, you will likely see someone using a refillable mug. Every mug they sell raises money for care and research at Akron Children’s Hospital. Stolte estimates the program brings in about $30,000 a year for the hospital. Many of Stolte’s employees also take part in a hospital fundraising telethon and a Breakfast with Santa banquet for patients and their families. The Spice Mill and BK Coffee businesses also support many local causes, including the athletic department at Boardman High School in Youngstown; they provided funds to build a new sports facility, Boardman Spartan Stadium. They also sponsor various academic endeavors for other area high schools, including their newspapers and business clubs.

They sponsor dozens of events every year to benefit charities large and small, including the Relay for Life, Carter’s Pajama Program, the American Cancer Society, the American Diabetes Association and Potential Development School, as well the Boy Scouts and the local animal shelter. Many company employees volunteer their time to sort and package food for the Second Harvest Food Bank.

After all these years, Stolte says he still enjoys his busy life, but also appreciates the time he can take away from the day-to-day operations of his business. The family has a place on the beach in South Carolina and Stolte steals away time for target shooting, hunting and fishing—not to mention family get-togethers. Above all, he relishes the role he plays as chief of quality control for his restaurants.

“I enjoy building relationships and working with people—watching them grow and develop into better business people,” he says. “Ultimately, it’s all of us who make the business successful.”