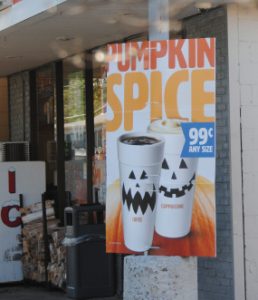 Mike White, owner of two Dunkin’ Donuts franchises in Kennesaw, Georgia, wasn’t worried when a high-end convenience store, Quick Trip, wanted to move into the same strip mall as one of his restaurants. In fact, he negotiated with the landlord and worked out a win-win plan, where he moved his Dunkin’ into a larger location at the other end of the strip center and QT took his original spot, complete with space to install even more gas pumps than originally planned.

White says he never feared the competition. “QT would be replacing a badly run gas station, building a much better one. They’ll provide the gas, I’ll provide the product.”

A year after the move, White says the change has been favorable. He often looks out his window to see a car pull up to QT for gas, then watches as the customer walks over to his restaurant for coffee or a snack.

“It’s increased the number of cars stopping in,” he says.

Since the 1990s, convenience stores have been striving to win over the coffee and breakfast on-the-go crowd, offering interesting menu items, new brews and flavor. But many Dunkin’ franchise owners remain unruffled by the competition, and welcome the co-existence.

The rise of convenience store coffee

“Coffee is a huge category in the convenience store business. Hot coffee generates 98% of their hot beverage sales,” reports Donna Hood Crecca, associate principal at the research firm Technomic. “C-store owners know that coffee brings people in the door, customers with the potential to become a loyal crowd.”

Convenience stores weren’t always focused on coffee; originally, customers came in for cigarettes, snacks and quick grocery items, or gas. 7-Eleven was the first to offer fresh brewed coffee in to-go cups, introducing the beverage in Long Island, New York in 1964. With the 1990s came improved selections, such as the introduction of their Café Select roast and frozen cappuccino. Flavored iced coffee was introduced in 2009 and, in 2011, the brand revamped their coffee bars. With 50 years in coffee sales, the chain now celebrates its accomplishment, selling special brew cups and making certain blends available for home preparation.

7-Eleven was early to the game, but their aggressive approach to coffee growth is typical of the industry’s trajectory, according to Crecca. She says that the 1990s was a time when many convenience stores began setting their sights on coffee drinkers.

“The move to more quality coffee has been progressive among c-store chains. They’re serving a more premium roast, as well as different types of coffee and fair trade,” Crecca says. “They’re also paying attention to their execution – how long [the coffee] sits, how often it is brewed.”

A closer look at the consumer

While older coffee drinkers will remember the days when the thought of convenience store coffee conjured up an image of a lonely pot kept warm on a burner, the younger crowd sees c-store coffee in a new light, and is more than willing to seek a hot, fresh cup of coffee at a Wawa, Cumberland Farms or Speedway.

“Gen X, millennials, Gen Y,” says Crecca of the typical demographic. “They’re of diverse nationality, with Hispanics over-indexed by ten points, and really a broad swath of income levels, from low to affluent.”

These generations are known for trying different flavors, personalizing their cup, and embracing new methods, reports the National Coffee Association. They’re also eager to support products that align with their social beliefs. Convenience stores are carefully catering to these characteristics.

For example, the convenience store chain Quick Check promotes the customer’s ability to “make it personal” and offers a large variety of sweeteners, creamers and toppings. Last summer, Pennsylvania-based Swiss Farms introduced their new coffee collection which focuses heavily on a clean label – including an organic blend, a rain forest certified, and a chemical-free, natural decaf. They’re also answering their customer’s desire for product sourcing knowledge by promoting their own dairy line.

While the effort among c-store chains to tantalize younger coffee drinkers may seem threatening, Dunkin’ franchise owners we talked with see it as just another part of the business.

Eric Eskander, who operates several Dunkin’ Donuts restaurants in southeastern Massachusetts, says there is a high saturation of convenience stores in his region, but he’s never been overly worried about them.

“Any competition is a problem,” says Eskander, who opened his first Dunkin’ shop in 1998. “The [convenience stores are] doing a terrific job executing their model; for them, the coffee business is a loss leader, to drive customers to the counter.”

The key difference, he says, is the focus. “Everyone wants a piece of the breakfast business. It’s just one piece for c-stores, but for us, it is our business.”

He keeps his shops up for the challenge, wherever it may arise. “We’re laser-focused on our operations, customer service, and speed,” he says. “In my opinion, the customer can differentiate: do they want a 99-cent cup of coffee from a convenience store, or come into our clean store for good, quality products?”

White agrees that a reputable product, strong customer service, and cleanliness are key components to standing apart. Convenience
store competition is familiar to him; a year after opening his first Dunkin’ franchise in suburban Atlanta in 2002, a Quick Trip moved in nearby.

“They installed a kitchen where customers can get their breakfast. I was a little worried, but we weren’t really negatively impacted,” he says. “It increased traffic tremendously, our lowest increase in sales annually since 2002 was six to seven percent.”

Convenience stores are in the coffee business for good, according to Technomic’s Crecco. “There may be trends within, but c-store coffee is not a passing trend.”

That means Dunkin’ operators will need to stay sharp and focused on their products and customer service.

“If you do it right, they worry, not you,” says White.