John Cadete and Guido Petrosinelli have each been involved with the Dunkin’ Donuts system for decades. Petrosinelli since the 1960s; Cadete since the ‘70s. Throughout their careers as Dunkin’ franchise owners, each has demonstrated a great commitment to hard work, sacrifice and the improvement of the Dunkin’ brand. On September 22 at Caesars Palace in Las Vegas, Petrosinelli and Cadete were officially inducted into the DDIFO Hall of Fame. As part of their acceptance speeches, both men made sure to thank their families for providing the support they needed to accomplish their goals.

“If [our families] didn’t jump on board with us, our success story could be a lot different today. As franchisees, we are the ones in the limelight, but behind the scenes it’s the family that makes it work. And for that, we are grateful,” said Petrosinelli, who singled out his wife Marilyn as a staunch supporter of his efforts.

Cadete told a story to make sure the guests at the annual Hall of Fame dinner also knew the extent to which his wife supported his initial foray into Dunkin’. Cadete’s brother-in-law, Tony Andrade, suggested the two buy a Dunkin’ Donuts shop in Massachusetts. At the time, Cadete and his wife Tina were living in Bristol, Rhode Island, the town where Cadete settled when, at age 12, he came to America. In order to buy his first shop, Cadete had to sell his home in Bristol and move to an apartment in Massachusetts. The experience, he said, was like “starting over.”

“My goal was always to buy a business and give my family a better life. [Selling the house] was a hard decision. I needed my wife’s support.” Cadete recalled how Tina was “all in with the decision,” which he said was “the best decision they ever made.”

Cadete and Petrosinelli are now part of a select group of men and women who have been recognized as pioneers who helped build the Dunkin’ brand. In all, 24 franchise owners and others are enshrined in the DDIFO Hall of Fame.

The 2015 inductees have deep roots with the Dunkin’ system, having come on board in the early days of the brand’s growth. Petrosinelli was one of the first franchisees in Rhode Island. He tells the story of how, in 1967, he was in the industrial catering business in Providence. When he needed donuts, he bought them from the Dunkin’ shop on Reservoir Avenue in Cranston, RI. Then one day, he saw a sign advertising opportunities as a Dunkin’ Donuts franchise owner; he made the call and landed a meeting with Ralph Gabellieri and Dunkin’ founder Bill Rosenberg. 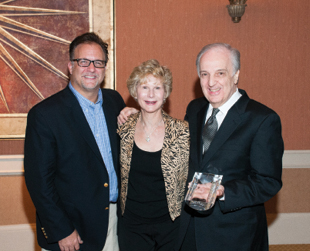 As he grew in the system, Petrosinelli got more involved on different councils and committees. Over the years, he has witnessed the different threats to Dunkin’s success: new competitors, new owners, new rules and regulations. During his acceptance speech in Las Vegas, Petrosinelli said the greatest threat to franchisee success he now sees is the government.

“The big elephant in the room, is the government with mandates coming down, and making new laws. It will make it difficult to operate,” he said pivoting the discussion to how DDIFO can continue to play a role in protecting franchisee interests

“DDIFO has great experience in government affairs and is gathering info and doing research on behalf of franchisees to give us info we need to fight [mandates] off and protect ourselves. It’s important DDIFO continues to grow.”

Both Petrosinelli and Cadete acknowledged the new generation of franchise owners that is helping bring Dunkin’ to the next level—as a truly national brand with an all-day menu that supplements its beverage sales. Cadete said how pleased he was that his two children are involved in the business. “It made Tina and me happy because they wanted to follow my footsteps,” he said.

Petrosinelli noted that the next generation will face different challenges than he and his peers did, yet he is confident Dunkin’ will remain a powerful brand.

“Since I’ve been in the system, things have changed, people have changed, customers are changing. We are challenged every day to stay up with needs of customers. We have competition that’s off the charts, more than it’s ever been. Fortunately, we have great partners in Dunkin’ [Brands]. They work with our franchise leadership at the BAC, RAC and DAC level, taking on the challenges to keep the brand successful,” he said. “And our franchisee leadership is doing an outstanding job, without being selfish about it.”

As the audience applauded Guido Petrosinelli and John Cadete for their accomplishments, it was not lost on any one in the room that these two men embodied the unselfish spirit that has helped Dunkin’ weather the storms of the past and position itself for a sunny future.