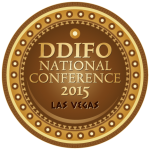 Of all the meetings Dunkin’ Donuts franchise owners are invited to attend in a given year, few offer the variety of perspectives that the DDIFO National Conference does. Not only is it an opportunity to network with franchisees from across the system – some of whom have been with Dunkin’ since the early days, – it is also a chance to hear directly from franchise owners and industry experts who have firsthand knowledge about operational and regulatory issues. The Fifth Annual DDIFO National Conference will be held in Las Vegas on Sept. 21 and 22 at the iconic Caesars Palace Hotel and Casino.

“The National Conference is our organization’s leading professional meeting, where major developments are discussed and there are unparalleled opportunities to network with your peers,” says DDIFO Executive Director Ed Shanahan, who has worked tirelessly to put together speaker panels and workshop options.

Once again this year, the National Conference will host a franchisee roundtable discussion moderated by Robert Branca. In past years, the roundtable has provided an open and honest dialogue among franchise owners about a range of issues. This year’s panel is expected to include: Tim Cloe, who sold his Northeast restaurants and now operates a network of stores in Florida; Nicole Hansen, who opened her first store in Reno last year with new locations on the horizon; Parag Patel, who is developing restaurants in the highly sought-after southern California market; and Alex Smigelski, who owns a number of shops in New York and Pennsylvania and is also part of a growing franchise group in Indiana. The conversation, which has always been a highlight of the National Conference, will center on topics ranging from how an independent franchisee association protects interests of its members, to market challenges, to attracting and retaining new customers.

Another highlight of this year’s National Conference is expected to be the presentation from prominent franchise attorney Robert Zarco, the founding partner of the Miami law firm, Zarco Einhorn Salkowski & Brito. Known as a passionate and compelling speaker, Zarco will touch on a number of legal issues, primary among them: franchisee-franchisor relations.

In the wake of the National Labor Relations Board’s “joint employer” ruling, Zarco will confront the forming divide between courts and the business community. While DDIFO has reported on the multitude of ways the ruling affects established laws and the current franchise model in this magazine and in Shanahan’s weekly eBlast, “Small Regular, No Sugar,” Zarco will bring conference attendees up to speed on the latest developments, while also providing his unique twist on the pros and cons of the joint-employer issue.

As Shanahan notes, many Dunkin’ Donuts owners are also franchisees in other systems. To accommodate their growing interest in the broader scope of franchising – and to help them learn more about opportunities in other systems – DDIFO has opened its National Conference to vendors representing other successful franchise chains and is expecting five or six non-competing brands to exhibit at the Conference this year.

The exhibit hall will feature a multitude of goods and service suppliers as well—many of which are regular DDIFO meeting and conference Business Members. Shanahan says he is pleased with the number of returning Business Members and new ones that have already signed up for the National Conference.

2015 will also herald the induction of a new class of franchisees into the Dunkin’ Donuts Franchise Owners Hall of Fame. This year, the Hall of Fame dinner and induction gala will be held on Tuesday evening. The Hall of Fame celebrates those who have contributed significantly to the success of Dunkin’ Donuts; there are 22 men and women currently in the Hall.

So why attend the 2015 DDIFO National Conference in Las Vegas? Past attendees testify to its value as a business meeting focused solely on the issues that confront Dunkin’ Donuts franchise owners. There is good conversation, important learning and time to have a little fun—this year at the legendary Caesar’s Palace, a bastion of world-renowned luxury. Registration is now open!

“This is a most important and informative event for Dunkin’ franchise owners from every corner of the Dunkin’ footprint. There is a value for each and every one who attends the conference. They will not be disappointed.” says Shanahan.