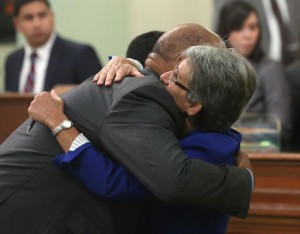 Late yesterday afternoon, the California Assembly gave final approval to the California Fair Franchising legislation by a vote of 41 – 27!  This is a significant victory for the franchisee community across the country.  The win, coming in the face of significant resources being poured into its defeat by the IFA and other organizations reinforces the importance of continuing the fight to restore balance to the franchisee/franchisor relationship.  The legislation, which has been known as SB 610, must now go back to the Senate (it was passed by the Senate earlier this year in a slightly different version) for a final enactment vote.  If enacted by the Senate, the bill will then go to Governor Jerry Brown for his signature.  Brown has yet to formally say whether he will approve the measure and opponents will no doubt bring much pressure on him to veto it.  Notwithstanding, we offer our hearty congratulations to all of those who were so deeply involved in the effort and worked so hard to secure this win for franchise owners, especially Keith Miller, Chairman of the CFA and John Gordon, DDIFO Restaurant Analyst and a host of others – a job very well done, indeed!!!  We will advise on the Governor’s actions as soon as they become known.