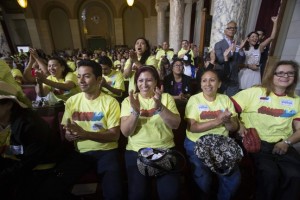 The Los Angeles City Council this past week, on a 12 – 3 vote, took steps to dramatically increase the minimum wage to $15.37 per hour by 2017 for hotel workers in the City of Angels!  The specific proposal came about after Los Angeles Mayor Eric Garcetti proposed gradually increasing the minimum wage for all Los Angeles workers to $13.25/hour.  The City Council reportedly wanted to “even the playing field” between non-union and union hotels and the local hotel workers union (SEIU) was pushing the increase.  Last week’s vote was only a preliminary one, but there is no reason to believe this week’s final vote, expected Wednesday, will be any different.  They’ll come after QSRs soon!