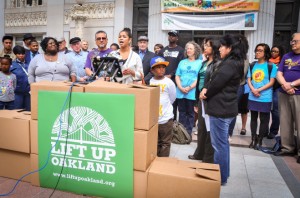 As we’ve cautioned in past issues, the ripples from Seattle’s successful implementation of a $15/hour municipal minimum wage continue to encourage other municipalities to implement their own minimum wage rules.  There are palpable efforts underway in a host of California cities to establish their own municipal minimums in excess of the state minimum which just increased from $8 to $9/hour effective July 1 of this year.  This past Monday, by a vote of 6 – 3, the San Diego City Council approved a San Diego minimum that will go to $9.75 in January 2015, $10.25 in January of 2016 and finally to $11.50 effective in January 2017.  Thereafter, beginning in 2019, minimum wage increases will be tethered to the local Consumer Price Index (CPI).  At the same meeting, the Council also adopted an ordinance mandating that business provide paid sick leave for all employees as well.   Elsewhere, Oakland voters will be asked in November to approve increasing the minimum wage within the city to $12.25/hour and also mandating one hour of paid sick time for every 30 hours worked.  The Oakland initiative would also require annual cost-of-living adjustments.  Not to be outdone, the California cities of Richmond and Berkeley each have initiatives pending to further increase recently increased minimums – to $13/hour in phases by 2018 in Richmond and to $12.53/hour in Berkeley by October 2016.  Both cities thereafter tie the minimum to CPI increases and provide for mandatory paid sick leave for all employees.  Notwithstanding the generous increases, labor and other advocates claim they are insufficient and are pushing ballot initiatives for $15/hour.  These and other cities in the East Bay are also looking at the feasibility of creating a regional minimum wage.  State and municipal minimum wages were updated as of July 15 and are available here.