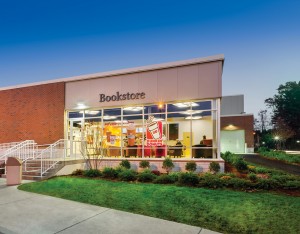 “It’s easy to access between classes, the line is never too long, and the workers really put out the orders quickly and efficiently,” he says. “Most everyone I know uses it a few times a week just as I do.”

“Universities are increasingly looking for more amenities to offer campus residents and visitors, and our brand’s flexible design options couple convenience with great-tasting food and America’s favorite coffee,” Grant Benson, Dunkin’ Brands’ vice president of franchising and business development said in a recent press release. “As we continue our expansion, both east and west of the Mississippi, we have a continued focus on recruiting qualified operators to grow our presence at colleges around the country.”

Whether a campus offers a full retail shop or centrally located express stations, the response from both students and faculty has been overwhelmingly positive. 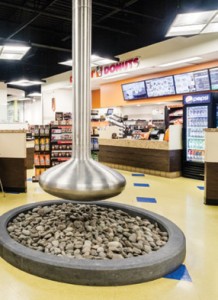 “If the lines are any indication, people really appreciate having a Dunkin’ Donuts on campus,” says Virginia Tech senior James Dwight. “Most of my friends use it at least occasionally, and some use it almost daily. It’s been a good addition to campus.”At the grand opening of the Dunkin’ Donuts at Seton Hall University in New Jersey in August 2012, lines were out the door as both students and faculty members checked out the new addition to Walsh Library. Living room style seating in the shop’s indoor area offered the perfect welcome for those looking to socialize, while other students enjoyed the summer weather by sitting at the shop’s outdoor tables.

When franchisee Mohammed Haque opened his location at The Plaza at Blanton Place at Montclair State University in New Jersey, it couldn’t come quickly enough. While construction was wrapping up, Sodexo, the school’s dining service provider, invited Dunkin’ Donuts’ mobile unit – The Great One – to set up nearby for six days, offering free coffee and munchkins as a means of introducing the new addition to the neighborhood.

At the University of Pennsylvania, the Dunkin’ Donuts on Walnut Street in University City draws rave reviews, with reports of long lines, but incredible efficiency to get everyone in and out quickly. One Yelp reviewer gave the location an easy five out five stars.

“Quickest coffee on Penn’s campus. I’ve been here at least 20 times over the past six months at many different times and I’m always in and out within three minutes,” she writes. “One of the few places I will go to directly before an exam when time is super tight.”

In addition to serving the student population, being on site at colleges and universities also offers a unique opportunity for franchisees to actively engage in student culture. Some Dunkin’ Donuts shops, particularly at larger universities, choose to show their spirit by using school colors within their locations, or by incorporating school mascots into promotional events. Special touches like these make the shops perfect post-practice relaxation stations, or pre-game gathering spots.

In terms of convenience, most campus shops encourage student customer loyalty by partnering with existing food service companies and tying into their meal plan structure, allowing customers to use prepaid accounts to purchase food and drinks, rather than requiring cash, which students tend to carry in smaller amounts.

“Our location accepts Dining Dollars,” says Dwight. “That adds to it being a convenient stop on the way to classes.” 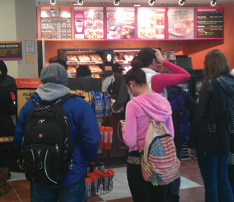 At some schools, adding a Dunkin’ Donuts location has provided an opportunity for giving back in a meaningful way. Such is the case at Providence College. Students at PC expressed a desire to purchase Fair Trade Certified™ coffee in order to promote economic justice and social responsibility (see sidebar).

When someone at Providence College Dunkin’ buys an Espresso or Latte, they are supporting that effort because Dunkin’ Brands is a partner of Fair Trade USA, and buys Fair Trade Certified Espresso beans. When a Providence College customer purchases regular roasted coffee, a portion of the sales is donated to Catholic Relief Services Fair Trade Fund, which makes donations to local farmers in coffee-growing nations. It’s been a win-win-win relationship for the students, the college and the farmers.

Meanwhile, at least one college, Westfield State University, has had fun with their on campus location by building a specially created event around it. Participants in “The Dunkin’ Dash” had the opportunity to win prizes by running one mile, eating six donuts, then running a mile back. Additional prizes were offered up for best donut-themed costume, prompting one student to – curiously – arrive dressed as Batman’s sidekick Robin.

The alternative points of distribution strategy is an important component to reaching the 15,000 domestic location level, which Dunkin’ Brands touts as part of its growth story. Already there are close to 600 non-traditional Dunkin’ locations around the country, with more on the way. So, while commuters carrying brief cases at Penn Station in New York City grab a coffee and breakfast sandwich to start their day, it’s clear the habit of incorporating Dunkin’ into the morning routine is starting even earlier—with co-eds carrying backpacks lining up at their campus center to begin their day running on Dunkin’.