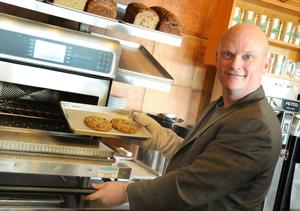 John Vomhof Jr. reports in the Minneapolis / St. Paul Business Journal that Caribou Coffee Co. Inc. is testing ways to perk up its breakfast offerings and soon will launch an enhanced line of chocolate beverages.

Brooklyn Center-based Caribou recently added oatmeal to the menu at 25 stores in the Twin Cities and Washington, D.C., and it’s offering fresh-baked pastries at about 25 locations in the Twin Cities. If the tests are successful, those items might be rolled out companywide.

The coffee chain also will introduce mochas and hot chocolates made from gourmet chocolate at all of its roughly 500 stores in November. As part of that launch, the company will add dark chocolate to its selection of milk- and white-chocolate beverages.

“While I think we have the very best coffee in the industry, we can and should do better in other areas,” said Dan Hurdle, Caribou’s senior vice president of retail operations and product management. “Everything we sell should be on the same level as our coffee, and there are some things in our lineup that are either missing or not as strong as they should be.”

R.J. Hottovy, an analyst at Morningstar Inc. in Chicago, said Caribou is “playing catch-up” in the breakfast segment, where rivals such as Seattle-based Starbucks Coffee Co. and Canton, Mass.-based Dunkin’ Donuts are much more established.

“This is something Caribou absolutely has to do in order to keep up with the industry,” Hottovy said. “It feels like they’re getting in the game a little late, but hopefully they can drive something off it.”

Caribou’s new line of fresh-baked treats — everything from scones and muffins to pretzels and cookies — are prepared in TurboChef convection ovens that have been installed at the test stores. Caribou already features many of those menu items at its other locations, but they are baked, sent to stores frozen, then thawed before serving.

“We believe the quality has gone up an enormous magnitude,” Hurdle said of the food that is baked at the stores. The chain is using a different supplier for the test products, but officials declined to name the firm.

Installing the ovens also will allow Caribou to add breakfast and lunch sandwiches to its menu, although there are no plans to do so at this time, Hurdle said.

Meanwhile, Caribou is testing two varieties of oatmeal: one made from oats and another made from a high-protein multigrain blend. Customers can choose from a variety of toppings, including fruit, nuts, raisins, brown sugar, maple syrup and honey.

The oatmeal, which is made from scratch by Caribou’s baristas, costs $2.45 in the Minneapolis market and $2.75 in Washington.

Starbucks added oatmeal to its menu in summer 2008 and it quickly became the company’s top-selling food item. In fact, company officials have called oatmeal the “hero” of its breakfast lineup.

So far, Caribou’s bakery items and oatmeal have been “very well received,” said Hurdle, who spent five years at Starbucks prior to joining Caribou a year ago. If the tests continue to perform well, Caribou plans to add those items at more stores across the chain.