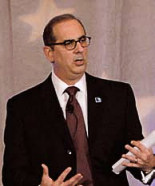 Nancy Weingartner asks in the April Issue of Franchise Times: Can You Hear Me Now? OK, franchise pundits, see if you can name the franchise association that identified card check – that looming legislation that would eliminate secret ballots, therefore making it easier for employees to join a union – as its No. 1 2009 legislative issue.

If you said the International Franchise Association, you’d only get partial credit. The group we’re referring to is the Coalition of Franchisee Associations, a franchisee association, that’s just recently thrown its wallet into the ring to oppose card check.

Why? “If I want to organize a franchise with company and franchisee units, I’ll go to the franchisee first,” Rick Berman, president of Berman and Co., a D.C.-based public affairs company, told CFA members. “You should have a stronger dog in the fight than the guy in a job (the franchisor). If card check is passed, it could be catastrophic.”

Getting a strong dog in the fight was the intent of CFA’s inaugural political action forum, which brought together about 100 officers from its member independent franchisee associations, including Burger King’s National Franchisee Association, Supercuts, Buffalo Wild Wings, Pizza Hut and Dunkin’ Donuts (DDIFO).

The association of associations was founded in 2007 and collectively represents more than 14,000 franchisees employing more than 1.2 million people.

“We started a PAC (political action committee) because we want to be on the Hill with dollars,” said Frank Capaldo, CFA chairman.

The two-day event introduced members to Washington political insiders, such as William Kristol, editor of The Weekly Standard, and Guy Harrison, executive director for the National Republican Congressional Committee, as well as updates on the four issues that were identified as the 2009 legislative priorities: Employee Free Choice Act (card check), Credit Card Fair Fee Act, Arbitration Fairness Act and Paid Sick Leave. The CFA supports the fair fee act and arbitration fairness act, which would address mandatory arbitration clauses in contracts, and opposes mandated paid-leave programs, which they say would increase small-businesses’ costs.