As Chicago customers popped into the Dunkin’ Donuts at 1519 West Madison for their everyday morning fuel on June 1st, they might have looked up and wondered what on Earth Mrs. Illinois Lisa Sonnenberg and Bulls broadcaster and former NBA great Bill Wennington were doing hanging out together up on the roof with a bunch of local police officers.

Sonnenberg and Wennington were two of the celebrity guests who appeared to help Dunkin’ Donuts franchisees across the state raise money for the Illinois Law Enforcement’s Torch Run. Each year 3,000 police officers march 1,500 miles, carrying the Flame of Hope to its ultimate destination in Normal, Ill., for the Special Olympic Games.

The Chicago-area store to raise the most money was 12371 Derby Road in Lemont, Ill., which totaled $6,602.24. The statewide response was incredible – Dunkin’ Donuts across Illinois raised a grand total of $243,000, crushing 2011’s total of $215,000. The “winning” store in the state was 2306 E. Oakland Avenue in Bloomington, Ill., at a whopping $8,400! Other participating Chicagoland Dunkin’ Donuts included Batavia, Naperville, and Willowbrook, Illinois.

Hosting the event was the Illinois Dunkin’ Donuts franchisees’ way of helping state police officers “shout from the rooftops” to raise money and increase awareness about Special Olympics.

Dunkin’ Donuts franchisees in the Chicago area held their annual “Cops on the Roof” event to lend financial and community support the Illinois Law Enforcement Torch Run, which benefits the Special Olympics. For the 10th year in a row, police officers staked out rooftops at about 130 Dunkin Donuts in Illinois starting at 5 a.m. 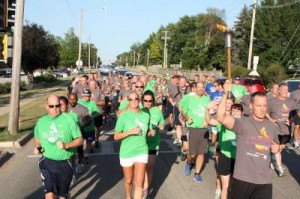 Local police officers carry the Flame of Hope to support the Special Olympics.

In exchange for these officers “doing time,” Dunkin’ Donuts donated to the cause. They also donated a free donut to every customer who visited the cops and gave to the cause, and generous givers (over $10 amounts) received even more free goodies like a Torch Run travel mug and a free medium coffee.

Lisa Sonnenberg is the stunning winner of the 2012 Mrs. Illinois pageant. Bill Wennington is a retired Canadian basketball player who won three NBA championships with the Chicago Bulls.