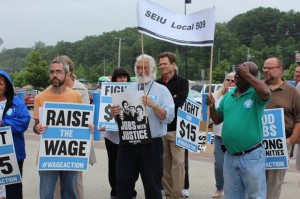 Last week, we reported that elected officials in the “City by the Bay” had reached agreement on an effort to put a $15/hour minimum wage proposal before San Francisco voters as a ballot referendum this coming fall.  Now, the issue has been raised for consideration in Chicago as just a few weeks back, several Alderman joined together and filed a proposal with the Board of Alderman to set a city minimum wage of $15/hour.  Initially, it was reported that a dozen or so of the 50 members of the Board are in favor of the $15/hour bill.  Elsewhere around the country, minimum wage hikes – at $15/hour or some other increased number – seem to be all the rage.  New York City Mayor Bill de Blasio had been pushing state lawmakers to increase the state’s minimum to $10.10/hour indexed to inflation, but also allow individual cities within New York to raise their own minimum wages to $13.13/hour.  As time in the current legislative session winds down, it is hoped that state lawmakers will adjourn the current session without voting on the measure.  Massachusetts lawmakers this week also voted to increase the Bay State minimum wage to $11 per hour by 2017 ($1 increases in each of the next 3 years), giving Massachusetts the highest wage in the country for a period of time.  Although the increase has yet to reach the Governor’s desk, he is expected to sign it with much fanfare when it does get to him.  The bill, which does not index the minimum wage to inflation, still requires the formality of enactment in the Senate, which will likely occur next week.  Massachusetts franchise owners are also advised that Attorney General Martha Coakley, considered by many to be the frontrunner in the Governor’s race this fall, has already come out and endorsed the $15 minimum wage.