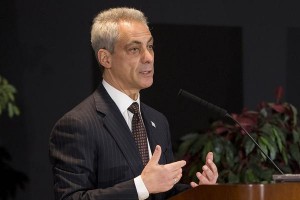 Andrew A. Nelles, US Department of Labor | cc-licensed https://flic.kr/p/npXMX9

In a reversal of his earlier position on the issue, Chicago Mayor Rahm Emmanuel this week announced that he will try to pass a minimum wage ordinance increasing the minimum wage within the Windy City to $13/hour by 2018 – regardless of what is done with the minimum wage at the state level in Illinois.  There is a non-binding referendum on the November ballot on raising the minimum wage and legislation is pending in the Illinois General Assembly as well.  Earlier this year, the Mayor said he planned to wait until after the November elections to do anything on a Chicago minimum wage to allow the Illinois legislature time to act on its own minimum wage legislation.  The reversal appears to be mostly driven by Chicago politics as there is speculation that Emmanuel could face a democratic primary challenge from his left as a number of liberal leaders feel he hasn’t been liberal enough.  Before being elected Mayor in 2011, Emmanuel served as Chief of Staff to President Obama in his first term.