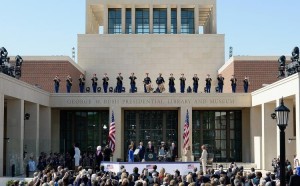 Speaking above of Chicago and President Obama, the Chicago Tribune released a poll this week showing voters are evenly split on their tax dollars being used to help finance an Obama Presidential Library and Museum after his presidency concludes in January 2017.  The poll shows that 47 percent were in favor of using tax dollars for the library, 45 were opposed with 8 percent undecided.  Chicago is competing with New York and Hawaii and a host of other possible venues for an Obama Presidential Library.  In fact, Obama Foundation representatives are already visiting other Presidential Libraries to begin the design process.