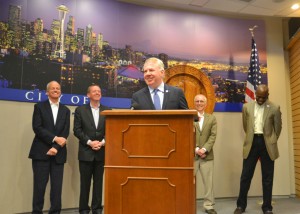 In what was described as a boisterous meeting, a Seattle City Council committee yesterday unanimously approved a proposed ordinance creating a minimum wage within the city of Seattle of $15/hour.  The proposed ordinance is scheduled to be voted on by the full Seattle City Council on Monday.  Despite the recommendations of the advisory committee that no amendments to the proposal be adopted, the Committee approved several amendments.  First, they adopted a delay in its implementation from January 1, 2015 to April 1, 2015.  Further, the committee adopted a “sub-minimum wage” for teenagers, but rejected amendments that would have accelerated phase-ins of the minimum wage as well as an amendment discounting tips from total compensation.  Perhaps most egregious of all, the bill will count any franchise business as a large business and thereby require a franchised business to pay a higher minimum wage during the phase in period than a non-franchised business, solely because the shop is part of a larger chain.  Under that definition, a franchise owner would automatically be considered a “large employer” and hence be required to meet the $15 minimum as of January 1, 2017.  Subsequently, the minimum wage will be indexed to inflation.  We will advise you on any new information as soon as it may become available.