By AdminPublished July 14, 2013Category A Look at the Law 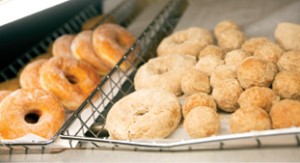 The Act provides an exception for certain sellers of prepared foods who meet a specific statutory definition and sell items that contain four or more servings packaged as one item sold for a single price.

As we comb the courts for examples of cases involving franchising, restaurants and labor law, we try to home in on those that could impact Dunkin’ Donuts franchise owners. In this issue of Independent Joe, we want to bring you up to date on a series of cases argued before the U.S. Supreme Court which indicate it will be more difficult for lawyers to file certain class action lawsuits in Federal Courts.

Three cases: Wal-Mart Stores, Inc. vs. Dukes; Comcast vs. Behrend; Genesis Health Care vs. Corp. et al vs. Symczyk, all held for the employer in collective or class action wage and hour cases.

Genesis, the most recent case, involved a nurse who sued her employer for unpaid meal breaks under the Fair Labor Standards Act 29 U.S.C. §216(b). Even before her lawyers were granted certification under Rule 68 of the Federal Rules of Procedure to file the case as a class action, the employer (Genesis Health Care) offered to pay her $7,500 to compensate for her lost wages, costs of litigation and counsel fees. When she failed to respond to the offer, the District Court dismissed the case.

The case was heard in the 3rd Circuit Court of Appeals which reversed the ruling and held for the Plaintiff. It was then appealed to the U.S. Supreme Court. Justices, citing different views of Circuit Courts, upheld the District Court’s initial holding that the case be dismissed for mootness where no other person had joined in her suit which was filed individually and “on behalf of others”. The Court held that she had no personal or continuing interest in representing others in the action, once her case was dismissed. The case was dismissed for mootness. The 5-4 decision was written by Justice Clarence Thomas.

This case shows us that class action attorneys will continue turning to state courts when filing class action suits because they tend to follow friendlier rules and statutes toward employees in work related class actions.

Another case we have been watching involves Dunkin’ Donuts franchise owners in New Jersey. Attorney Ross Schmierer of the firm, Paris Ackerman & Schmierer LLP (sponsor members of DDIFO) successfully defended six DD franchisees in a case brought by a customer who noted that he was charged different rates of sales tax at different Dunkin’ shops in the state.

The Buck Stops with the Franchisee

The case was featured in Franchise Times under the headline “Dunkin’ kerfuffle centers on New Jersey’s ‘convoluted’ Tax,” which gives you an idea this was no ordinary lawsuit.

It involved six New Jersey Dunkin’ Donuts franchise owners sued for the way they charged sales tax on varying combinations of items sold at their restaurants. Although the case was ultimately dismissed with prejudice, it serves as a cautionary tale that any franchisee can be held at fault if sales taxes are not properly collected.

Even assuming that he was correct, which he wasn’t, his total out of pocket loss for the alleged overcharging was less than $40. Nevertheless, he hired a consumer class action attorney and filed a lawsuit in New Jersey’s highest trial court claiming the franchisees and Dunkin’ Brands were guilty of unjust enrichment and consumer fraud. To make matters worse, Dunkin’ Brands asserted a crossclaim against the franchisees for indemnification based on the Franchise Agreement. Moreover, the franchisees could not point the finger at Radiant because their agreements for the point-of-sale systems put the onus on the franchisees to ensure that the systems were programmed with the correct sales tax exemptions and information.

After extensive research and consultations with tax professionals, the defendants responded to the Complaint by serving a frivolous litigation letter explicitly detailing how the franchisees were simply following New Jersey’s complex Sales and Use Tax Act and its recognized exceptions.

Specifically, the Act provides an exception for certain sellers of prepared foods who meet a specific statutory definition and sell items that contain four or more servings packaged as one item sold for a single price.

In this case, the exception was triggered upon the sale of four or more servings of donuts or Munchkins that were packaged as one item on the menu board and sold for a single price. For instance, six donuts were offered and packaged as one item sold for a single price on the menu board and therefore, the franchisees did not collect or remit sales tax on the sale. By contrast, the franchisees also offered one donut for sale. Because this item does not meet the “four or more” statutory threshold, the franchisees were required under the Act to collect and remit sales tax on such a purchase.

Thus, defendants explained that the plaintiff was appropriately charged sales tax on his purchases and his only recourse was to take this up with the Legislature.

Because the rules governing sales tax varies from state to state and even city to city, it’s advisable all Dunkin’ Donuts franchisees consult with their accounting and legal professionals when programming their point-of-sale systems. In the end, the franchisor and point-of-sale vendor will look to the franchise owner to ensure that sales tax is collected appropriately from customers. If not, they may wind up in court—or at least paying to retain legal counsel.