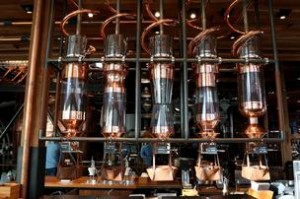 We noted a couple of interesting stories on Starbucks over the past few weeks that you might be interested in.  First, we noted that they launched a huge roastery and “coffee bar” on Capital Hill in Seattle last week.  The 15,000 square foot roastery will be used solely for roasting, tasting and education their customers on their small-batch Reserve blends.  The new facility is their eighth roastery around the world.  The company also announced last week that it will begin offering delivery services on a trial basis at a number of its locations around the US sometime in mid to late-2015.  Elsewhere, it was announced that Keurig had purchased European rival Bevyz, a Malta-based developer of a single portion multi-drink system for hot and cold beverages for $220 million.  The deal is expected to close within the next couple of months.  Lastly, problems continue for McDonald’s as its  comp sales fell again, by another 2.2% in the month of November.  In its US stores, amid a drop of 4.6% in domestic comparable sales, the company announced plans to trim and simplify its menu offerings in the hope of reversing the negative trends of the past several months.