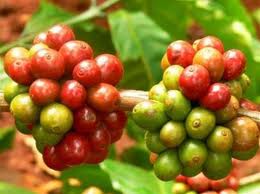 Lisa van der Pool reports in the Boston Business Journal that he price of coffee is continuing to rise. Wholesale coffee prices are the highest they’ve been in 13 years.

Futures contracts for December 2010 delivery have risen each of the last few days and a fungus in Colombia is threatening to hit the country’s coffee output, according to a Bloomberg News reports.

Leaving managers of many Boston-area coffee shops to ponder whether to pass on those costs to customers.

The J.M. Smucker Co., which licenses Dunkin’ Donuts coffee for sale in retail stores, has already announced it will raise prices by four percent.

But whether local Dunkin’ Donuts shops hike coffee prices is up the each franchisee, according to the Canton donut and coffee chain.

“Dunkin’ Donuts restaurants are independently owned and operated by franchisees who are responsible for making their own pricing decisions.

“While we are aware of J.M. Smucker Company’s recent price increase for grocery store coffee, it will not impact the cost of coffee in our restaurants. Dunkin’ Donuts licensing agreement with J.M. Smucker Company extends only to coffee sold in retail environments like grocery stores, mass merchandisers, club stores, and drug stores throughout the United States,” Michelle King, director, Global Public Relations at Dunkin’ Brands, Inc. in Canton, Mass., said in a prepared statement.

Starbucks Corp. has announced it will not raise prices. Starbucks last raised its prices in January of this year.

Boston-based FlatBlack coffee house, which has three retail stores in the city, is raising prices about 5 percent this week. A regular latte at the gourmet shop costs $3, up from $2.85.

“We have no choice but to raise our prices, said Jeff Chatlos, co-founder and vice president of FlatBlack coffee shop.

Josh Gerber says he has worked hard to not raise prices at the two locations of 1369 Coffee House in Cambridge that he runs, but he says if coffee prices continue to spike, a price increase is on the horizon for his customers.

Overall, Gerber’s coffee prices have gone up between 5-15 percent over the past year.

“It’s a lot when it¹s your primary product. It’s unfortunate, because I know people are cutting back on their budgets and we¹re working hard to make that morning coffee fix possible,” said Gerber, co-owner of 1369.

William Trull, a roaster for Red Barn Coffee Inc. in Milford, watches coffee prices on his notebook computer as he’s roasting beans. He said Red Barn hasn’t raised its prices yet, but that may change. He expects coffee prices to settle down again, but not until October or November.