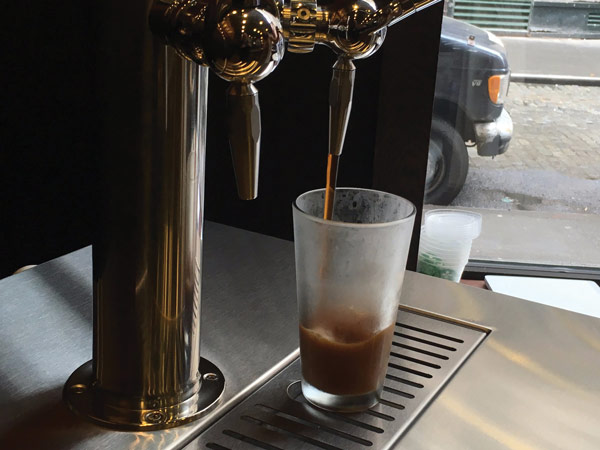 For as long as people could remember, cold frothy drinks came from the Baskin Robbins side of the house. But, it’s Baskin’s big brother that is bringing nitrogen-infused iced coffee to customers at Dunkin’ Donuts counters in several test markets. Nitro cold brew is the latest innovation sweeping the already hot iced coffee market.

Dunkin’ Donuts estimates it sells 1.7 billion cups of hot and iced coffee every year, and industry watchers say one-in-five U.S. adults drink iced coffee. As Dunkin’ quickly learned this year, iced coffee aficionados are willing and eager to try twists on the original. Cold brew iced coffee as a category grew by 115 percent between 2014 and 2015, according to the research firm Mintel. Dunkin’ Brands has credited the release of its cold brew as having a positive impact on same store sales. Now, the market for cold brew is being jolted with new flavor and consistency thanks to the scientist’s realization that coffee can be treated like beer. Think Guinness… the creamy, foamy Irish stout beer is perhaps the closest approximation to nitro cold brew—without the alcohol, of course. It’s even served from a keg.

Stumptown, a Portland, Ore specialty roaster, was apparently first out of the nitro gate, followed shortly after by Starbucks, which announced in May that it was adding Nitro Cold Brew and Vanilla Sweet Cream Cold Brew to its roster of cold beverages. In a press release, Starbucks said it fashions its cold brew by taking “a small chilled keg of Starbucks Cold Brew coffee and infusing it with nitrogen, which unlocks the super-smooth, natural sweetness of the Cold Brew coffee.”

According to the publication Extra Crispy, “Cold brew promotes a smoother, less acidic taste and a naturally sweeter flavor.” But, perhaps the thing that will startle the men and women who prepare

and serve Dunkin’ Donuts coffee is that nitro cold brew can be served without ice, because the nitrogen chills the liquid.

A description of the nitro offerings at Starbucks, published in Business Insider, pegs the drink as similar to carbonated beverages, but with smaller bubbles. The description goes on to say by the process of infusion the nitrogen gives the cold brew a taste that is more creamy than bubbly, and slightly sweet rather than bitter.

Market research conducted by Mintel finds 55 percent of older millennials (age 29-38) and 30 percent of men drink retail-purchased cold brew coffee. Stumptown is charging a dollar more for nitro than its regular cold brew iced coffee, sending a message that consumers are willing to pay a premium for the frothy beverage. For Dunkin’ franchise owners, getting a premium price on a product that draws millennials is a viable strategy for future growth and profit.