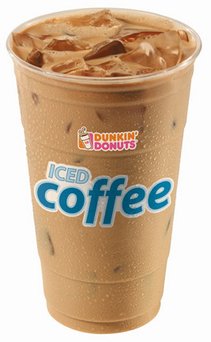 Jill Waltral reports at QSR Magazine The vision of winter: sitting by a fire, sipping on freshly-brewed coffee, wrapped in a warm, fuzzy blanket.

“There’s actually a hardcore loyal iced coffee fan base out there that drinks iced coffee year round … so we really wanted to celebrate those folks in kind of a fun way,” says Dave Tryder, director of interactive and relationship marketing for Dunkin’ Brands. January 11 marked the beginning of the “Twinter Games” and “YeDDi of the Week,” two social media strategies implemented by Dunkin’ Donuts this winter on Twitter and Facebook, respectively.

For the past two weeks, Dunkin’ Donuts iced coffee fans have been signing on to Twitter to participate in the “Twinter Games,” where they have the opportunity to tweet their love for iced coffee. One $50 Dunkin’ Donuts gift card winner is chosen daily.

Tryder shared some of his favorite entries from week one of the “Twinter Games,” which included the phrases “my icy vice,” “stone cold greatness,” “fresh frigid fuel,” and “cold metal winter.”

“There certainly is always a business angle to it,” Tryder says. “We’re trying to support our iced coffee business at a season when some folks don’t think about iced coffee, but it’s an opportunity to turn it into something that’s really fun and engaging and speaks to a big audience out there.”

Dunkin’ Donuts’ other social media strategy, “YeDDi of the Week,” recognizes iced coffee fans who aren’t afraid to brave the cold. The title appropriately refers to the mythological Yeti, also known as the Abominable Snowman. Participants can post a picture of themselves holding an iced coffee to the Dunkin’ Donuts Facebook fan page. The fan that is named “YeDDi of the Week” has his winning photo placed as the page’s main photo.

For Dunkin’, Tryder says, the social marketing strategy has been a huge success. The company launched social media efforts 18 months ago, and since then, the Dunkin’ Donuts Facebook page has more than 10,000 fans, and the Twitter site is being followed by somewhere nearly 44,000 people.

“I think we’ve found a nice niche,” Tryder says about Dunkin’ Donuts’ place within social media. “It’s something, quite honestly, that’s working for us. We want to continue to use it, we want to continue to be innovative, let our customers have some fun, but also certainly figure out ways to help it measurably drive the business, because at the end of the day that’s the most important thing.”